Pinhoe was a weather-boarded cabin on a brick base, 1 mile 1,511 yards from Broad Clyst box, on the up side at the Broad Clyst end by the level crossing. The original crossover, 249 yards at the Broad Clyst end was joined, as we have seen, by a second crossover at the west end from 1943, when the Ministry of Food private siding was installed. The box originally had a Steven's frame with 11 levers but this was extended to 17 levers about 1943. Another lever, 'A', was added in 1953 to release the new Pye Storage ground frame. Preece 1 wire block instruments controlled the section to Broad Clyst up to 1959. On the section to Exmouth Junction the Preece block instruments were superseded by Sykes lock and block in 1892, and these in turn were replaced in 1938 by 3 position block instruments. There were distant, home, starting, and advanced starting signals in both directions, the semaphore distant signals being replaced with colour lights in 1962. The gate lock and wicket gates were operated by lever, but in the absence of a wheel in the signal box the gates were opened and closed by hand. The B3181 was a busy road so the gates had to stay open whenever the line was clear. When the gates were shut, as they often were, road vehicles could make a diversion of a mile along the A38 to cross by the bridge and pedestrians could come on to the station and use the footbridge. 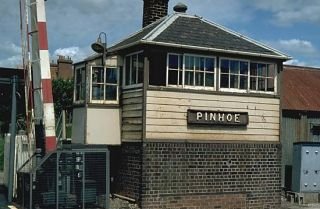 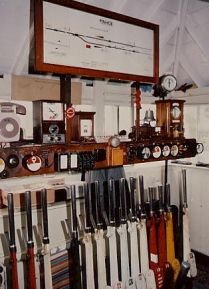 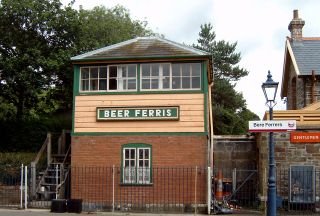 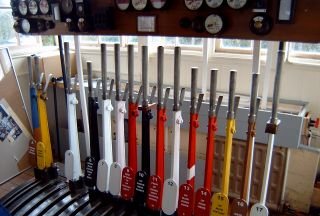 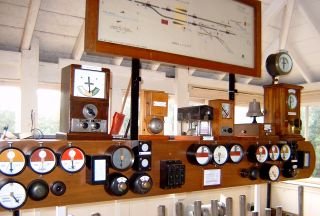 Pinhoe signal box did not have a closing switch so was open continuously, as illustrated in the 1952 instructions. This was convenient in that the level crossing gates could be opened at any time; more important for the railway was Exmouth Junction, less than two miles away. Exmouth Junction signal box was the busiest on the line and as soon as the signalman there had received the 'train out of section' bell code from Pinhoe he could begin to signal the next up train. The running time for an up passenger train from passing Exmouth Junction to arrival at Pinhoe was just four minutes, but a pick-up freight starting at Exmouth Junction yard took about seven minutes. Delays to up trains clearing Pinhoe signal box could soon affect all up trains as far back as Exeter Central, as well as those on the busy Exmouth branch.

Organising the pick-up freights between here and Exmouth Junction required skill and attention from the Pinhoe signalman. Even when all trains were running on time it demanded smart work to get the locomotive running round an up arrival and off down to the Pye Siding and Exmouth Junction Sidings before the next down passenger train. In the event of delay departure from Exmouth Junction sidings would be delayed in turn, or the train could be held in the 'Cold Store' siding clear of the main line.

There were normally two porters, working alternate early and late turns at Pinhoe, supervised of course by the stationmaster, who lived in the station house. They covered all the booking and parcels office duties. In the late 1940s the Pinhoe porters were Ken Baker and Bernard Watts. In 1908 the Pinhoe stationmaster was J. Hutchings, followed by: 1910-1914 D.J. Kieft

The signal box had three full time signalmen. Following an agreement for a shorter working week about 1950 they were assisted by rest day relief staff from Exeter, as required. Between 1944 and 1955 Mr Walter Cheesley was one of the Pinhoe signalmen, travelling in from Broad Clyst where he lived in a railway house. During this period the other two Pinhoe signalmen included Mr Arthur Parker and Mr Harold Mock. In the early 1960s Mr Fred Sheldrake was a Pinhoe signalman.

Pinhoe closed in 1966 and subsequently many of the buildings and the footbridge were demolished, although the station house survived. In 1983 the station was reopened.

The signal box was taken out of service on 13 Feb 1988. The cabin and lever frame were lifted out by crane on the same day and taken by lorry to Bere Ferrers where it was re-instated on a new base at the back of the platform under the direction of Chris Grove who owns Bere Ferrers station booking hall. Although the cabin now has a new name 'Beer Ferris' the Pinhoe signaling diagram remains inside. The box has now been fitted with a sophisticated real time computer system which allows the box to be operated in real time just as if it were still a working box at Pinhoe. At the moment two signals and a ground signal are connected to the box with plans in place to add more. 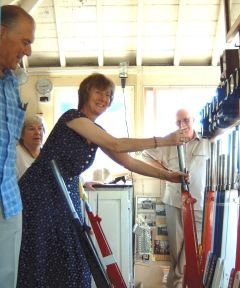 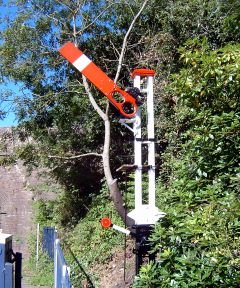 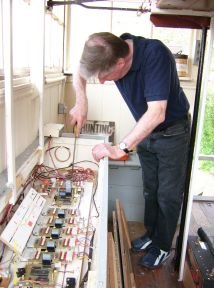 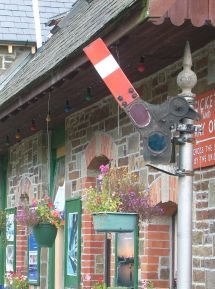