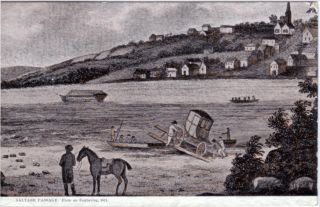 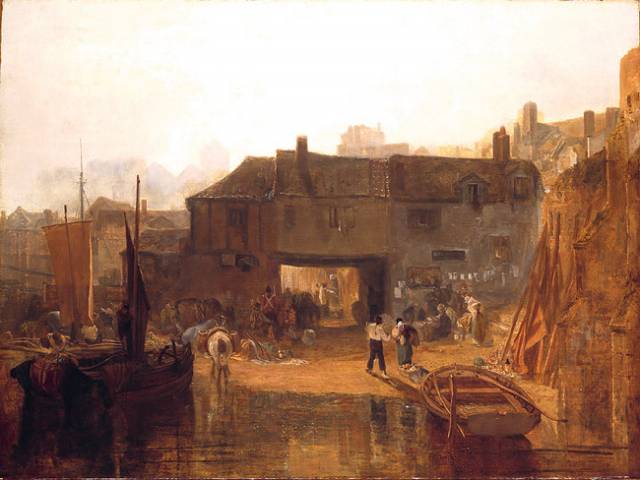 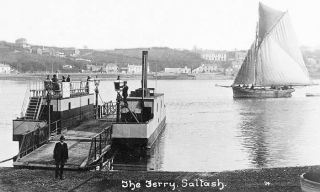 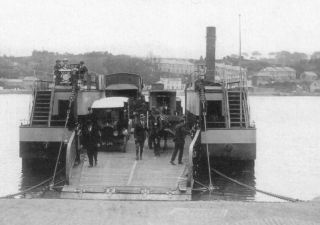 Saltash Passage is documented as early as the 13th century; and Douglas C. Vosper in his ‘The Ancient Ferry at Saltash’ declares there is evidence that it was an important crossing at the time of the Norman Conquest. The rights of ferry at Saltash belonged to the Valletort family from the years following the Norman Conquest until 1270, when Roger de Valletort sold TrematonCastle and estate to Richard Earl of Cornwall. Thereafter, the Earl's bailiff received the rents which fell due to the manor for Saltash Passage, in the 1290s they amounted to £6.18s. a year. 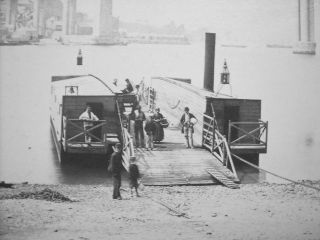 From 1337 the burgesses of Saltash leased the ferry from the Duchy of Cornwall for £10 a year, the Duchy providing the boat. They continued to hold the ferry on lease until 1356 when the Black Prince granted it to his military porter, William Lenche, in consideration of his services and his disfigurement by the loss of an eye at the battle of Poitiers. In 1355 the Black Prince received a complaint from the master of a foreign trader that his boat had been commandeered for the Cremyll ferry; the Cremyll ferryboat having been seized to replace the Saltash boat, which was under repair.

The wind and fast tides of the Tamar could make the crossing prolonged and hazardous. Horse-boats to convey pedestrians and animals were introduced at an early date. Queen Elizabeth's charter to Saltash in 1585 specifically grants the passage, and this is confirmed by charters of 1678, 1683 and 1774; but Richard Carew explains that this was no more than 'benefit of the passage': and that a rent always remained payable by Saltash to the Duchy of Cornwall because of the manorial origin of the ferry. By 1618 the rent of the ferry had increased to £20 a year. The passage rose to considerable importance in the later years of the l7th century, and was the coach crossing for Cornwall, and the mail route. On 29th May 1733, the ferry overturned and sank with the loss of twenty lives, nine of whom were Plymothians.

Passengers did not have an easy time, in October 1760 Mrs. Russell of Bedfordshire wrote to her brother,

"We journeyed to Saltash mounted on horses with cloak bags, bandbox, dog, etc. in our laps, in order to ferry over. When we arrived there we stayed near three hours for the boat: but by the time it came there, the market people came so fast upon us that we were quite jockeyed, for it holds but nine horses, and sixteen wanted to get in. We stayed a little while, but both men and women were so brutish and dexterous at it that, though they each had panniers, they leapt in like dogs, on their horses; sometimes their panniers went over the other side, and their horses down. It became quite a battle which would get in first, either by fair means or foul. This deterred Mr. Russell from venturing ourselves among such west country brutes, and luckily a man-of-war's boat with eight oars happened to come ashore with the Lieutenant, when Mr. Russell begged the favour of him to let it carry us over, which he readily agreed to. So we left our horses for the two men (ferry crew) to get over as they could the next turn, which they did with the same difficulty as before, which obliged us to dine at Saltash". 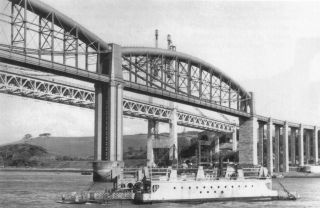 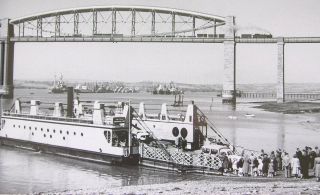 The Russells probably dined at the Passage House Inn, (now The Boatman) which has outlived the ferry. Mr. Tucker, was the landlord at that time and had recently refurbished the inn, building a large stall-stable, and providing the establishment with everything good for the reception of travellers. Due attendance was given at the ferry, and carriages safely and expeditiously put in and out of the ferry-boat, the passage of which, for the encouragement of travellers, the Corpor­ation have fixed at the following low rates;- for a coach and six 7s.6d. a carriage and four 5s, a carriage and pair 2s.6d. and a one-horse chair ls.3d.

Most people who walk along the waterside below the road and rail bridges will not notice a plaque on the roadside wall which proclaims: "BOROUGH OF SALTASH: This plaque commemorates the closing of the ferry across the River Tamar at Saltash on the 23rd day of October 1961, after more than 700 years of service." For the greater part of that time the Saltash ferry was the most important in the West of England and the Borough of Saltash derived a good proportion of its income from it. Certainly the £35,000 compen­sation paid to the Borough by the Tamar Bridge Joint Authorities was less than generous.

In the 18th century the ferry leases provided for Saltash residents to cross free with horses and carriages. Wheeled vehicles were regularly conveyed by this time. At Michaelmas 1772, the highest bidder for the ferry tolls had to pay a rent of £223, to work the boat himself and the lease was to be void if anyone complained to a J.P. that they had been kept waiting for the boat for more than half an hour. In 1761 travel became better when sections of the road from Trerulefoot to Saltash were improved, but in 1791 the opening of the Torpoint "New Passage" two miles downstream caused ferry traffic at Saltash to gradually decline. The competition probably made the Saltash operators look to their laurels, but it did have the effect of reducing disorder and overcrowding. By the turn of the century ferry trade seems to have improved as in 1804 the right of working the old horse ferryboats was let for £360 a year. Saltash Corporation continued to let the tolls until 1832, when the Earl of Morley, Mr. A. Edgcumbe, Sir William Molesworth and other prominent local gentry secured an Act of Parliament authorising them to purchase the ferry rights from Saltash Corporation and establish a steam-powered floating bridge. Tolls were increased to provide better accommodation, and Pope's shipyard at Turnchapel started work on the new steam ferry under the direction of J.M. Rendel, the Devon-born engineer who had pioneered his chain-system ferry at Dartmouth and at Gosport. 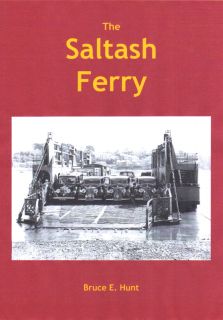