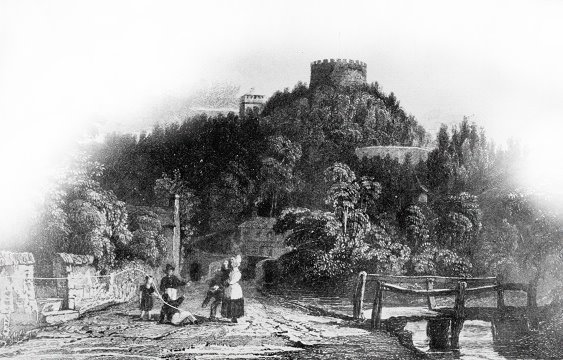 In the Anglo-Saxon period Trematon Manor was about 7,000 acres in extent. It covered today's St Stephens, Saltash and Botusfleming parishes, a bit of today's Pillaton parish, and the former 'Cornish Patch' on the east bank of the Tamar estuary (in line with the ferry crossing from `Ash'). The manor's administrative centre was Trematon village.

In 1068, two years after the Norman Conquest, King William came to Devon and Cornwall to put down an uprising. He ordered that castles be built, including Dunheved (Launceston) and Trematon. For the latter, a site 1½ miles away from the village was chosen. It overlooked the Lynher estuary, then a 'highway' serving Cornwall's second most important town, St Germans.

So, by circa 1070 the "motte and bailey" castle had been constructed, and control of the manor transferred to it.

The original defences consisted of earthworks and timber palisades. Later the timber was replaced by masonry; the keep in the 12th century and the bailey wall in the 13th. The fine and well preserved gate-house dates from around 1300.

In the Domesday Book (1086) Robert, Count of Mortain (William the Conqueror's half-brother) is recorded as having been given most of Cornwall including Trematon, where Reginald de Valletort was his tenant". The Count had established a weekly market beside the castle.

Either Count Robert or Reginald de Valletort founded a borough - the Borough of Trematon - adjacent to the castle and market. At that period, the borough and market needed the protection provided by the castle. However, in the second half of the 12th century a later de Valletort founded a new borough at Saltash, a much better site for trade. The Borough of Trematon lingered on, in name at least, until the 17th century.

In 1270 Roger de Valletort sold the castle and barony to Richard, Earl of Cornwall. The earldom later became extinct but all its possessions passed to the Duchy of Cornwall which King Edward III created in 1337 for his eldest son Edward, later known as the 'Black Prince'. The Duchy still owns the castle today. According to a survey made in 1337 the bailey contained a great hall, a kitchen, a lodging chamber and a Lady Chapel.

In popular imagination, TrematonCastle was one of the Black Prince's homes, at which he spent a lot of time. The reality is rather different. The Prince never based himself at the castle, although he probably visited it occasionally while he was staying at Plympton and Plymouth for several weeks in the summers of 1355 and 1363, preparing for expeditions to Aquitaine and Gascony. One good reason for the Prince to visit was to do a spot of hunting, because there was a deer park adjacent to the castle. In 1337 it contained 42 deer.

By the time of the Black Prince's death in 1376, the military significance of TrematonCastle was decreasing. However, in 1386 King Richard II had the castle repaired and garrisoned when there was a threat of invasion during the war with France. During his reign (1509-47) King Henry VIII closed the castle's deer park and disposed of the deer.

Despite its long history, only one record of hostilities at TrematonCastle survives. In 1549 the people of Cornwall, following the abolition of the old Latin Mass, rebelled against being forced to use the new English Prayer Book in their churches. Many Cornish people still spoke their old Celtic language and understood Church Latin better than English, which was to them a foreign language. A petition was sent to young King Edward VI (he was 10 or 11 at the time) in which, while saying they would remain loyal, "….we the Cornishmen, whereof certain of us understand no Englyshe, utterly refuse thys newe serveses."

Sir Richard Grenville, his wife and other gentlemen, all protestants, had taken refuge inside the castle but were besieged by some of the rebels.

One morning Grenville was persuaded by traitors that the rebels would behave honourably if he would go outside and negotiate. He went out through the postern (which still exists) but was seized and threatened with death, unless those inside the castle surrendered. The rebels then sacked the castle and the gentry were stripped of their fine clothes and jewellery, some fingers being broken as rings were pulled from them. Sir Richard and the rest of the gentry were carted off to LauncestonCastle where they were jailed with other protestant Cornish gentry. They remained there until the rebellion was crushed two months later. A.L. Rowse in "Sir Richard Grenville of the Revenge" writes that it was "a humiliating experience for an old warrior, and he was at Launceston until Humphrey Arundell returned defeated from the fierce battles that raged around Exeter." Had he stayed inside the castle they would have all been safe because the rebels did not have the necessary weapons to attack such a stronghold.

Late in the 16th century TrematonCastle was used to house large numbers of Spanish prisoners of war. In 1596 a dozen of them escaped, tried unsuccessfully to steal a boat, then fled into the countryside, causing great alarm before they were recaptured. 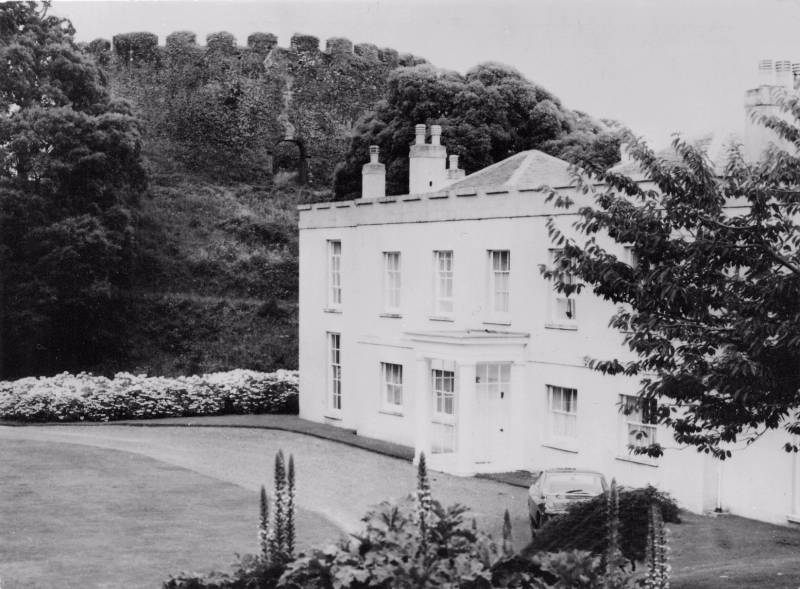 In his "Survey of Cornwall" (1602) Richard Carew wrote in a reference to Saltash, "Here that great carrack which Sir Francis Drake surprised on her return from the East Indies unloaded her freight and through a negligent firing met with an improper ending." The treasure from the San Felipe (taken on Drake's Cadiz raid) was stored at the castle; it was probably landed at Antony Passage.

By the middle of the 17th century the castle had become ruinous, occasionally offenders were tried and if found guilty, imprisoned there. It continued to be used as a prison until 1780. In the 18th century the castle's interior was used as a market garden, tended by a poor family living in the gatehouse.

In 1806 Benjamin Tucker, secretary to the Admiral Earl of St. Vincent and later to become Surveyor-General to the Duchy of Cornwall, took a 90 year lease of the property from the Duchy and set about transforming the place, with gusto! He cleared away any ruins that remained within the bailey, knocked down a length of bailey wall and breached the bailey bank in order to make a new vehicular access. He also demolished another length of bailey wall to provide a view of the estuaries.

In 1808 Tucker commenced building a 9-bedroomed house in the bailey using some of the stone from the demolished walls. More of the stone went into new boundary hedge-banks enclosing the grounds, and no doubt some was used as hard-core for the driveways laid out along the lines of former defensive ditches. Tucker built two lodges and constructed a remarkable length of drive that zig-zagged up the hill from the lower lodge (now gone) at Forder. He landscaped the grounds, laid out gardens and in them built mock ruins into which he incorporated several carved stone doorways derived from the clearance work in the bailey. He built an orangery, glass-houses, stables and other outbuildings, and he created a huge walled garden on the northern hill-slope.

At the time, some people called Tucker a vandal. Today we may regret the loss of parts of the bailey walls but we have to admire Tucker's creativity. Undoubtedly he arrested the decay of the castle.

Benjamin Tucker was a very wealthy man. He filled his new house with all sorts of treasures. He also refurbished the gatehouse in which he established a museum of natural and ethnological curiosities. His collections included a 2,500 years old Egyptian mummy and its two coffins.

In the castle grounds was a memorial to Admiral John Jervis, Earl of St Vincent who suggested the construction of the Plymouth Breakwater. It was a block of the breakwater limestone. A bust of the Admiral, which once topped it, was removed to the house long ago, but the stone bearing the date of his death, 16.3.1824, has disappeared.

The Duchy next leased the castle to Brigadier-General Thomas Porter, who held it from 1897 until his death in 1938. The general served with the 1st Cavalry Brigade at the relief of Kimberley. While he was in South Africa he sub-let the castle to Mrs Katharine Parnell, widow of Charles Stewart Parnell, the prominent Irish politician. Previously, as the infamous Mrs Kitty O'Shea, she had been Parnell's mistress for ten years. Later Duchy tenants of TrematonCastle have included Sir Claud Russell, a retired diplomat (1939-59), who let the castle become run down. Lord Caradon (formerly Sir Hugh Foot), Britain's representative at the United Nations in New York (1963-82). Mr Douglas Grant (1961-63) spent a lot of money on restoring the castle the Queen visited him there in 1962. Mr Julian Darling, heir to the 2nd Baron Darling (1990-91).