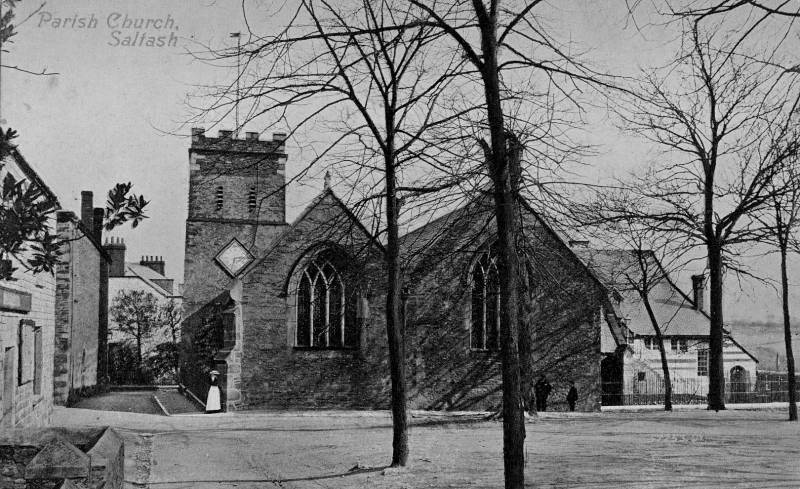 Visitors to the church may be surprised to find that essentially it is a Norman building erected more than 800 years ago. It is one of the few Cornish churches still having Norman buttresses. Its architectural significance has not been fully appreciated in the past.

The Borough of Saltash was founded by one of the de Valletorts, lords of Trematon Castle, circa 1175. The founder provided a large chapel for the inhabitants; it was erected beside the central market square of the new town. The chapel was dedicated to St Nicholas, patron saint of travellers, sailors and safe journeys (etc.!) - appropriate for a place where an ancient land highway crossed an important estuary (itself a highway) by means of a ferry.

For more than 700 years St Nicholas's Chapel was a chapel-of-ease, subordinate to the mother church of St Stephen, although baptismal rights were acquired before the end of the medieval period. During the 17th, 18th and 19th centuries, Saltash Corporation increasingly took control, designating the building "the Corporation Chapel" and appointing chaplains. There were many disputes; one case even reaching the Canterbury archbishopric's Court of Arches in 1752. The chapel had no burial ground, but until 1864 the Corporation permitted members of some prominent families to be interred beneath the floor.

In 1881, at the request of the Ecclesiastical Commissioners and the Bishop of Truro, the Privy Council made an Order by which the chapel became a parish church. The boundary of the new parish followed the borough boundary of that time. The Order did not cover the questions of ownership and control of the building; discord continued until an agreement was reached between the Corporation and the Church authorities in 1923.

The 1881 Order described the building as the "church of Saint Nicholas and Saint Faith". St Faith was included because the Revd Julian Moreton (last chaplain and first vicar) assumed that the chapel of St Faith at Saltash, licensed in 1435 and 1437, was part of St Nicholas's Chapel. In fact, St Faith's Chapel was situated elsewhere in the town.

The 12th century edifice was cruciform in plan and also had two low-roofed chapels, which were placed against the eastern sides of the transepts. Dressed stone for buttresses, quoins, the S transept arch, the S doorway (now blocked) and window-openings was obtained from Tartendown in the parish of Landrake. An unbuttressed tower was sited at the end of the N transept; evidently this was the last part of the Norman structure to be completed, because the tower arch is Transitional in style. The creamy sandstone used for dressings in the tower appears to be Caen stone from Normandy.

In the 14th century a large arch was inserted in the N wall of the chancel when the N chapel was remodelled to form a N chancel. In the 15th century a N aisle and N porch were added, Roborough stone from Devon being used for the arcade, windows and dressings. Certain windows in other parts of the building were enlarged during that century.

By the early 16th century a chantry had been established in the S chapel, and under the terms of its foundation the chantry priest also taught local children without charge. The chantry was dissolved in 1547; subsequently the S chapel was demolished and a separate school building was erected, partly on its site. Two Norman arches in the E wall of the S transept were then blocked and a square-headed window was inserted.

Circa 1840 the N aisle doorway was blocked and the N porch was dismantled and re-erected at a new S doorway. A major restoration of the building was carried out in 1869. It included the insertion of four new windows on the southern side, and a pyramidal roof (a feature that was at least 300 years old) was removed from the tower. Works carried out in 1930-31 included the stripping of plaster from the interior faces of the walls, and the conversion of the tower parapet from crenellated to plain.

The tower contains six bells; their dates range from 1760 to 1959. The primitive mechanism of the tower clock dates from the early 18th century, and so is a rare survival.

In the chancel, part of a Norman window can be seen above the 14th century arch in the N wall. It matched the existing Norman window in the S wall. The sills of these windows were at a level higher than the caves of the former N and S chapels.

There are some traces of medieval wall painting in the N chancel. On the splays of the E window, the markings imitate joints in ashlar walling. At the corner of the tower, the jamb and remaining voussoirs of a former doorway are painted to resemble a shaft and capital.

Grooves in the south and cast faces of the tower wall are the roof housing lines of the former N transept and the former N chapel respectively. (Similar grooves relating to the roof of the former S chapel exist on the exterior of the east wall of the S transept.)

The ceiling ribs and bosses in the chancel, nave and N aisle date from the 15th century. Some of the bosses are decorated with heraldic devices. The arms of the Earls of Cornwall appear in a representation of the common seal of the Borough of Saltash.

The hagioscope between the chancel and the S transept is a post-medieval feature. In the process of forming it, much of the rood stairway was destroyed.

The Drew memorial, with illustrations in relief, is mounted on the north wall of the N aisle. It commemorates two brothers and their nephew who perished in naval disasters in 1798. Capt. John Drew commanded the frigate HMS Cerberus. Returning from Ireland, he anchored the ship in Cawsand Bay and set off for the Hamoaze in a longboat. He and Lieut. James Drew, together with other crew members, were drowned when the boat capsized. Capt. James Drew commanded the sloop HMS De Braak, which sank off Cape Henlopen, Delaware, USA, after being overturned by a sudden squall. In 1986 her hull was raised: the divers found Capt. James Drew's pocket-watch; they also retrieved his gold ring bearing an inscription in memory of his brother, John, who had drowned just four months earlier.

The present font was given in 1870 to replace one broken during the 1869 restoration. The inscription on the brass plate attached to its base is partly incorrect. there never was a chapel at Wadgeworthy; the basin is in fact a fine example of a medieval domestic mortar.

Originally there were six Norman clasping buttresses. Two have been mutilated and two are now largely obscured by later structures. The two most visible are situated at the SW corner of the S transept and the SE corner of the chancel, the latter being the tallest.

The blocked Norman S doorway and its plain tympanum demonstrate that Tartendown stone could be used to good effect without ornamentation.

The pleasing appearance of the 15th century S porch (formerly the N porch!) owes much to the dressed Roborough stone which, when weathered, becomes honeycombed and develops many rich shades of cream and brown. No doubt the empty niche in the gable once contained a figure of St Nicholas.

Above the N chancel door is a lead plaque recording a restoration of the building in 1689 during the mayoralty of Matthew Veale.

Beside the N chancel door are inscribed blocks of granite arranged to read "GOD INCREASE THUS] BOROUG[H]". They were brought from an ancient public conduit in Lower Fore Street (dismantled in the 19th century), where the original inscription was (in part) "GOD INCREASE THIS SPRINGE"!! The original "S SYRINGE" portion is now in the front garden of Kingsleigh House, Culver Road.