Bridge across the Tamar

Brunel was not the first person to propose that a bridge be built across the River Tamar at Saltash.

In 1823 Captain Samuel Brown (1776 - 13 March1852) proposed that a suspension bridge with a span of 900ft and a height of 90ft should be built across the river. Not only did he propose a bridge, he drew up plans and a table of tolls that would have to be charged to produce a return for the shareholders. 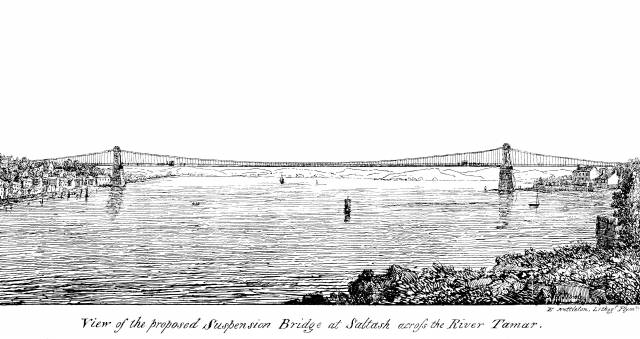 The idea was not as far-fetched as may first appear as Brown was an early pioneer of chain design and manufacture. He was responsible for the construction of a number of bridges and is best known for the Union Bridge of 1820 across the Tweed, the first vehicular suspension bridge in Britain.

Brown joined the Royal Navy in 1795, serving initially on the Newfoundland and North Sea stations. He served as lieutenant on HMS Royal Sovereign (1803) and in 1805 joined HMS Phoenix as first lieutenant. The following year he was appointed to HMS Imperieuse, followed by periods of service aboard the HMS Flore and HMS Ulysses.

During his service, he carried out tests on wrought iron chain cables, using them as rigging for HMS Penelope in 1806 on a voyage to the West Indies. This so impressed the Admiralty that on his return in 1808 it immediately ordered four vessels of war to be fitted with chain cables.

In 1808 Brown took out patents for twisted open chain links, joining shackles and swivels. His shackle and swivel designs were scarcely improved on for the next 100 years.

When Brown left the Navy he established a company (known as Samuel Brown & Co and also Brown Lenox & Co) with his cousin Samuel Lenox.

His firm went on to supply all the chain to the Navy until 1916, and made the chains for Brunel's SS Great Eastern, shown in the famous photograph by Robert Howlett.

Brown was also invited to participate in abortive proposals for a suspension bridge at Runcorn. In September 1818, he submitted drawings for Union Bridge over the River Tweed, which was completed in 1820.

He estimated that a bridge at Saltash would cost £51,500 to construct and with the addition of legal fees, land purchase and the construction of toll houses the total cost would be £60,000.

Brown emphasised the point that a bridge of this size would be a great attraction and could bring much trade to the town as people flocked to see the biggest bridge of its type on the world.

Brown’s plans were supported by some prominent SE Cornwall landowners. A public meeting was held and a subscription list for company shares was started. The intention was to apply to Parliament for the necessary enabling Act. Unfortunately, the funds pledged fell short to a considerable degree, so the project did not proceed.