Antony Passage was a ferry by prescriptive right, i.e. a ferry run since 'time immemorial'. It is mentioned in documents as early as 1324 as 'the passage across the water of Lynher' (in Cornwall passage means ferry). In those days the ferry belonged to the Daunay family who owned the manor of East Antony.

In 1450 the manor passed, with the ferry rights, to the Carew family, who in 1721 built the present Antony House which is located on the right of the carriage drive leading from the ferry landing (Jupiter Point). In April 1768 disaster struck when a bell for LandulphChurch, supplied by Fitz Antony Pennington, a bellfounder of Lezant was being conveyed by the ferry to Antony passage on a stormy day. The weight of the bell caused the ferry capsized and sink. Fitz Antony, who was accompanying the bell, and the ferryman were both drowned and the bell lost in the mud of the river bed. Fitz Antony's body was recovered, and laid to rest in LandulphChurch. A plaque in the south wall of the tower bears the inscription:

Little else is known of the history of the ferry until the end of the eighteenth century when its working were taken over by the Crosley family. They operated the ferry for several generations, until it fell into disuse in the early 1950s. Up to the early 1950’s the ferry operated from 8a.m. until 8.45p.m. (summer) or 7.45p.m. (winter), and was well patronised. This was because the numerous creeks on the north bank of the river Lynher made road building difficult. The Antony Ferry provided a valuable link by crossing the widest barrier (the Lynher) and saving the long detour via St. Germans. 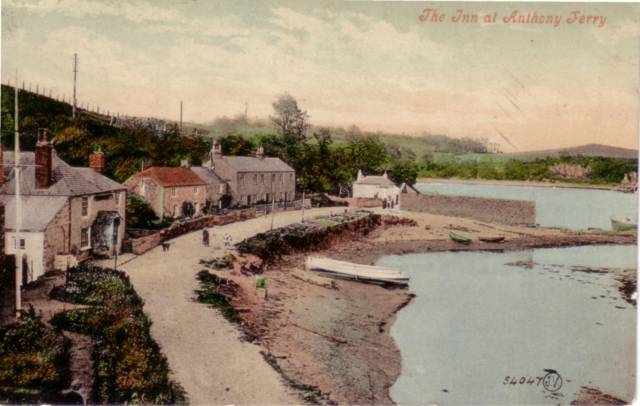 Postcard of Antony Passage with the Ferry House Inn on the left. The telegraph posts and

It was not however a ferry used by many to get to and from their work, though it was well used by the Carew family and the large staff of the Antony estate. The principal users were Plymothians who in days when people had to make their own pleasures, liked to use it in the course of a 'round tour' which for a long time was very popular. One caught the ferry to Torpoint, walked the two miles through the Antony Estate to Antony Quay, and took the ferry to Antony Passage, where in nearby Forder village the Seccombe family ran a Tea Garden at Apple Tree Cottage, with a small stores-cum-sweet shop. From here there was another 2-mile walk to Saltash, where the chain ferry to Saltash Passage connected with the terminus of a Plymouth tram-route. Alternatively the journey could be made in the opposite direction, depending on what time one wished to be at the Tea Gardens. Saltash locals would also use the ferry for a day out, Nellie Brewer who’s family lived in Forder can recall crossing via the ferry to Antony and walking to Whitsands for a picnic before returning to Forder by the ferry (a round trip of over 10 miles)

The Antony Estate provided a 16 foot rowboat, and until the early years of the last century a horseboat, which conveyed animals but not wagons. The passenger fare was 2d. return. The ferryman was also licensee of the Ferry House Inn, Antony Passage, where he lived. The river is over 700 yards wide at this point, and in a two or sometimes three knot tide the ferryman's money was hard-earned. The last operators of the horseboat were Abram Crosley and his eldest son Stewart, who propelled it with long sweeps. The craft had a cut-away portion in the gunwale to allow the horses, cattle or sheep to board or disembark from the side. The last horseboat was taken out of service about 1910, and lay for many years derelict on the beach between Antony Passage and the railway viaduct. Jack Crosley, last of the ferrymen, would tell how a few calves or sheep were often rowed across in the passenger ferry to save unnecessary hard work with the horse-boat; but the difficulty was in preventing them from jumping over the side. "The trick" he explains "was in splashing them with the oars as one rowed, to keep their heads down. It only wanted one to go over the side and the rest would follow".

During the Great War of 1914-18, when the Crosley menfolk were on active service, Doris Crosley ran the ferry virtually single-handed. She was well able to do so, being an accomplished rower, and she regularly won all the women's events at Watermen's regattas. In the years between the wars the ferry continued to be busy, but was fighting a losing battle against the encroachment of the motor car. Sir Reginald Pole-Carew wanted to close the ferry in 1921, but at an inquiry with a jury held at Saltash Guildhall on 4th August to consider the application for the discontinuance of the Antony Passage Ferry was opposed by St. Stephens Parish Council. After a lengthy discussion the jury retired at 4.20pm and after an absence of 25 minutes the foreman stated the majority were not in favour. The decision was received with applause.

From about 1925 when there were queues of waiting passengers, the Crosleys used a motorboat of their own, often towing a loaded ferry and other boats astern of it. On bank holidays the ferry could take between £15 and £20 in 2d. fares. In pre-­motorboat times these large crowds had been shared with Plymouth watermen, who however were obliged to collect tolls for the ferry in addition to their own fares, and so had to charge 4d, instead of 2d. Passengers not in a desperate hurry preferred to wait for the official ferry. With a wind up or down stream, the ferry was often sailed across, and a mast and sprits were carried for this purpose, but the boat was not fitted with a centre-board. The ferryman was recalled from the opposite side by waving a flag provided.

In the early days before the present road was laid between Forder and Antony Passage the road ran along the beach of Forder Creek and could become impassable at high tide. On these occasions the ferry would run in a triangular route between Antony Passage, what is now Jupiter Point and Passage Point (this is marked as a landing stage on the map below). A foot path lead from the landing to Wearde Road and then into Saltash. Some passengers bound for Saltash preferred this route even at low tide as the walk was more direct and less arduous. 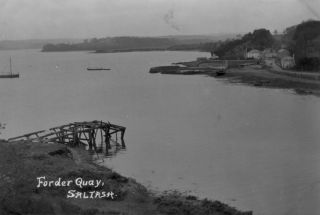 After World War II, the proliferation of the motor car and of ready-made amusements, caused a collapse in the ferry's passenger traffic. Jack Crosley, who returned from war service to take over the ferry again, found that it was no longer a full time employment. His father had arranged with the Antony Estate before the war to give up the licence of the Passage House Inn; now Jack arranged gradually to phase out the ferry service. The last two rowboats used on the ferry were purpose­ built by Mashfords of Cremyll for about £20, and could be seen, grey-painted, on the Passage beach after the ferry stopped running in 1952. The Carew family sold their properties on the Forder side (including the Passage House) in 1961. Antony House itself was acquired by the National Trust in the same year. The Antony foreshore which included the ferry landing has been leased by the Royal Navy for use by HMS Raleigh, the navy’s ‘New Entry’ training establishment at Torpoint, who used it for sail ­training and small boat handling. The land steps used by the ferry have been demolished, and what was always known as 'Antony Quay' to the locals, is now known by its geographical name of Jupiter Point. 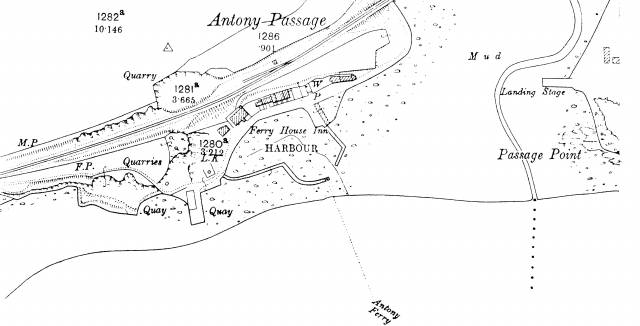 Within living memory the ferry crossing has a record free of fatalities or serious accidents. However, many years ago Abram Crosley found himself in a very anxious situation. He had embarked 15 children from an orphanage, who were accompanied by two convent nuns. When nearing midstream, he was aghast to see water rising over the bottom boards. A disaster seemed imminent, but he quietly asked the nuns to keep the children calm and in their places. Any panic would have been fatal. He leant on the oars with all his strength and hustled the boat across despite the incoming water which was soon up to the children's knees. When the boat's bow touched the shore at Anthony Passage, it settled on the bottom and filled. As the famed Duke of Wellington said after Waterloo, “It was a damn close-run thing”. Subsequent examination of the boat showed that the cause of the trouble was no worse than a displaced bung:

In lighter vein is the story of a grumpy old woman resident on the Antony side who was scared of sailing, as it caused the boat to list. Abram Crosley arrived under sail at Antony Quay when she was waiting. "I'm not getting in that boat with the sail up," she declared "so you can take it down." "Very good ma'am" said Abram and lowered the sail. After pulling clear of the quay a few strokes, Abram hoisted the sail and took the tiller. The woman's complaints were loud and long, but Abram sailed across. On her next crossing the ferryman was Abram's son Jack, and he too was under sail. "You can get that sail down", she shouted "I want to be rowed over and don't get up to your father's tricks and put it up again, I'm telling you". Jack obliged her by rowing across, and was astonished to receive a one penny tip for being co-operative.

Officially the Antony Ferry is still in existence, since as a public ferry an Act of Parliament would be necessary to terminate it, and it still appears on Ordnance Survey maps. The ferry rights, were conveyed to Mr. Richard Coombes in 1961. He bought the cottage on the south west side of the former inn.