When I wrote ‘Aspects of Saltash’ I included a photograph of the GWR locomotive KING EDWARD I crossing the Tamar on 19th September 1998 with a caption saying it was the first King to transit the Royal Albert Bridge.

At the time I was aware of rumors about Kings crossing into Cornwall, particularly in the war years but lacking any documented or photographic proof I decided to stay with known facts and stick with the 1998 date.

My caption generated this response from Maurice Dart:-

1.In circa 1935 Clearance Trials were carried out with Kings west of Saltash.

2.In 1935 (?) a King class thought to have been 6000 KING GEORGE VI passed Long Rock shed on a Summer Saturday afternoon on a VERY SPECIAL train to Penzance. It departed back on Sunday around lunchtime.

(An avid GWR engine spotter in his late teens who was learning to use a camera and became a Commercial Photographer. He was granted the freedom of Long Rock shed by Shedmaster Harold Luscombe).

3.I, Maurice Dart, was taken from St.Budeaux to Saltash one Spring Sunday morning in 1938 by my father on information from Harold Liddle to see 6028 KING GEORGE VI with one coach on the Down line at the start of Coombe-by-Saltash viaduct. The locomotive was facing in the Down direction.

(Well known author of many railway books, historian and authority on industrial and mineral railways)

4.Two separate trials were carried out by the GWR in Spring 1938 to monitor the performance of Kings on the curves west of Saltash. The first trial ran to Trerulefoot and the second ran to west of Doublebois. One of these trials is probably Item 3.

(Original Board member of Bodmin SteamRailway).

6. During the Plymouth Blitz any Kings on shed at Laira were driven across the Royal Alber tBridge to west of Saltash for "Safe Stabling" on several occasions, either Wearde sidings 'or in Shillingham tunnel.

7.During the Plymouth Blitz on many evenings Kings and 4700s were driven to Wearde sidings.

Pat English from a Laira Footplateman.

8. During the war a King once worked to Wearde sidings to collect empty carriages.

(Noted St.Austell Railway Historian who reckoned he had never ridden inside a railway carriage in Cornwall as he was always invited onto the footplate.)

9.In 1942 a King hauled a train of Army Tanks from Wearde sidings eastwards across the Royal Albert bridge and was seen passing through Saltash station.

(Career Railwayman in the Plymouth and mid-Cornwall areas. Area Manager at St. Blazey in the 1990s.)

Told to David Tozer by a Railway Police Chief who was himself told it by a retired GWR footplateman who had driven both of them. This was recounted to the Policeman on Saltash station whilst waiting for 6024 KING EDWARD 1 to work down to Par on Saturday 9 May 1998.

11.Early in 1960 on a weekday the Warship diesel scheduled to work the Down Limited from Plymouth to Penzance failed at North Road. Laira shed was contacted and attempted to start the Standby diesel without success. Laira then started up the only other diesel available but found it would work in one direction only so it was, failed. The only available locomotive of suitable power was 6026 KING JOHN which was sent from Laira to North Road and worked the train to Truro. It went on Truro shed and returned overnight running tender first at slow speed.

12. In 1960 a King worked a Special train to Penzance. Special dispensation having been given for the locomotive to cross the Royal Albert Bridge.

13. Photographes exist which were taken by a retired GP of:

(a) 6028 KING GEORGE VI at Saltash on one-carriage with the locomotive facing in the UP direction on an early Spring Sunday morning in 1938.

(c) Four unidentified Kings together in Shillingham tunnel during a 1941 bombing raid on Plymouth.

This was told to Mr.Astell of Lanner who is involved in the preservation of 6023 KING EDWARD 1 who hopes to gain access to the photographs to include in a proposed biography of the locomotive.

14.During the Plymouth Blitzes he was living in north Devon and working as an Auxiliary Fireman, aged 18/19: His unit was sent to Plymouth to assist with the damage and he was working alongside the GWR main line near Devonport or Keyham He was standing below an embankment and a engine came past very slowly. A colleague beside him said "Look, that is a King", going into Cornwall out of the way of the bombs.

(A very knowledgeable Railway and Local History enthusiast in his early 80s.)

Above data compiled by Maurice Dart 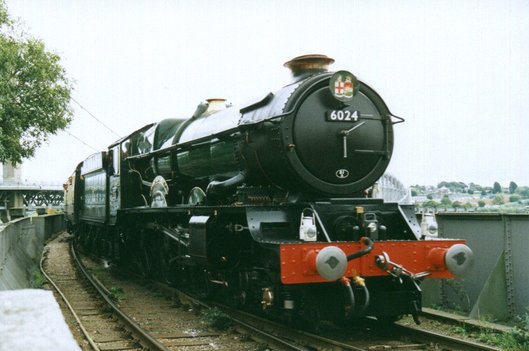 Although Maurice has recorded the above reports over many years, apart from his own eye witness account when he was a young boy, there is still no known official document or photograph that can prove emphatically that a King crossed into Cornwall before 1998.

I spoke to Phil Rundel, he was a fireman based at Laira and fired for all the wartime drivers, he told me that not one driver or fireman could ever recall any King going west of the west crossover at Keyham Station.

(Phil has just finished writing a book ‘Laira Fireman’ which documents his life on the railways, it will be in the shops in the summer).

On a personal note, I find human memory can be somewhat selective, anyone who has talked to their grandparents will know that they only remember the good times. But I also know after 25 years in the navy, that sometimes ‘needs must’ and I have on occasions seen the rulebook thrown away, so I keep an open mind