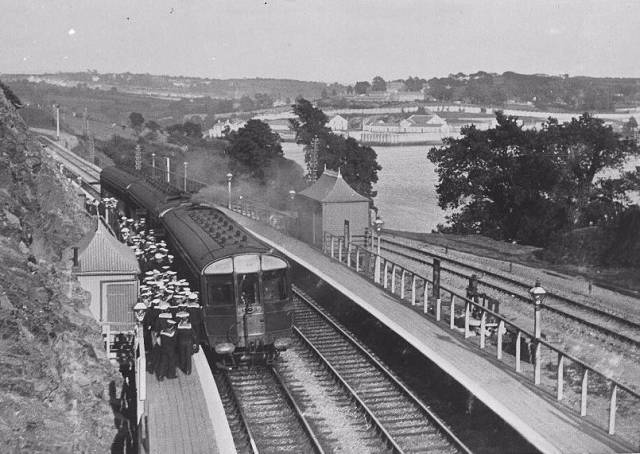 The halt was situated between Saltash and St Germans. The first reference appears to have been on 22nd February 1905, with the GWR seeking permission from the Board of Trade to 'construct and bring into use this stopping place.' This was to serve the men stationed on HMS Defiance, a naval establishment made up of a number of hulks and moored off Wearde Quay. The establishment was used to train naval personnel in the art of torpedo and mine warfare, as well as radio communication.

The halt was opened on 1st March 1905 and was inspected on 7th June by Colonel Yorke, who said in his report:

"I have the honour. I inspected on the 24th March the Defiance Halte near Saltash on the GWR The line is single, and the halte consists of a single raised platform 150ft by 6 ft wide which has been built by the naval authorities chiefly for the convenience of their officers and men. The platform is reached by two pathways, one for the use of the general public, connecting with the public road and the other leading to the Admiralty landing place. There is a sharp corner on the latter path at which I suggest a short length of post and rail fence be erected to prevent anyone in the dark from falling down the steep bank. The company's boundary is the pathway belonging to the naval authority. The company said they would draw the attention of the naval authority to the matter. I recommend that sanction be given to the use of the halte for passenger traffic."

On 31st July 1905 the GWR reported that the required fence had been supplied by the Navy.

It is thought that construction of the Halte was carried out by sailors from the shore base HMS Defiance to plans provided by the GWR. Before the fence was even completed plans were well in hand to double the track, move it inland and build a new stone viaduct over the creek at Forder (the deviation route).

The GWR wrote to the Board of Trade, on 14th July 1905, about the construction of a new Defiance Halt on the deviation line, between Saltash and St Germans and its improved facilities. This time a 250ft platform was proposed on each side of the up and down lines, with alcoves at the west end of each platform and steps to the road over bridge. The GWR reporting on 14th May 1906 that the works were ready for inspection. Again Colonel Yorke attended and wrote:

"I have inspected the halt for rail motor cars which has been constructed between Saltash and St Germans on the GWR. The halt consists of two platforms each 350ft long, 7 ft wide and 3ft above rail level. Each platform has a small shelter as well as lamps and name boards. The halt is on the new deviation lines between mile 151½ and 152¼. The arrangements being satisfactory I can recommend."

It is thought that the new station came into use early in 1908 when the new Forder Viaduct was opened and the original stopping place closed. 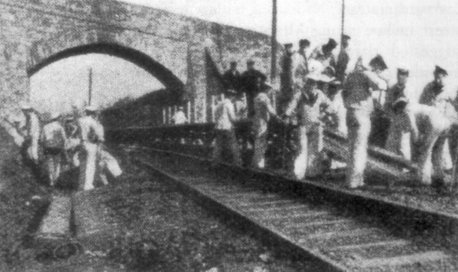 Defiance Halte under construction by sailors from the shp 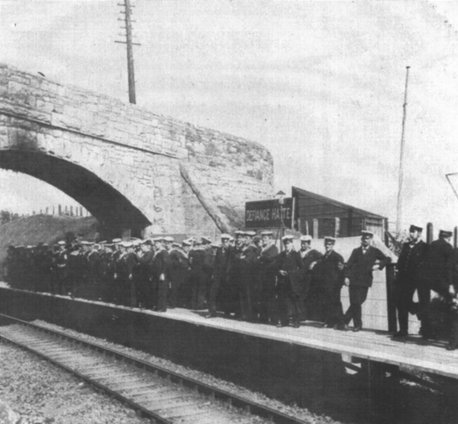 Defiance Halte -  Note the spelling in the name board 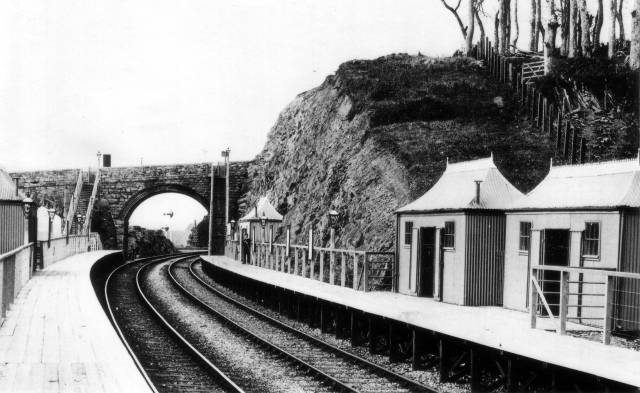 Defiance Halt was renamed Defiance Platform from 1st May 1906; additionally, it was reported, parcels traffic was handled. Shortly after opening widening and lengthening of the platforms to 400ft was authorised, together with the erection of an alcove on the up side, brought from St Budeaux and a similar example on the down side, this time from Ford. Estimated cost £263. 9th July 1921 further entry reads: 'provision of shelter at an estimated cost of £250.' 22nd November 1928 lavatory accommodation authorised at estimated cost of £214. The station closed on the 27th October 1930 after the Navy decided to replace the wooden hulks of HMS Defiance with steel-hulled ships and relocate the establishment near Wilcove 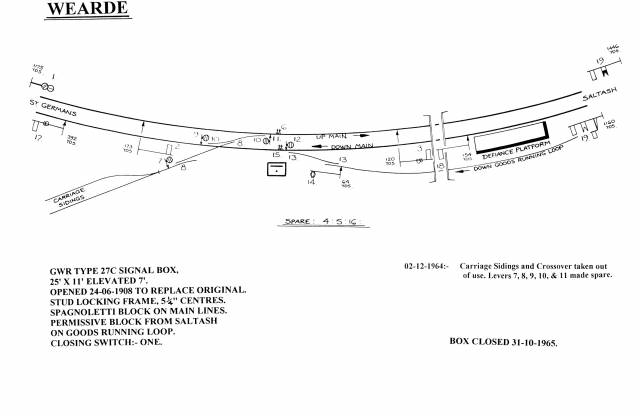