In January 1864 the “Tamar Kit Hill and Callington Railway Company Ltd” (TKH&CR) published a prospectus stating their intention to facilitate the transit of goods, merchandise and mineral produce between the Port of Plymouth and the town of Callington via the River Tamar to Kelly Quay and wharves at Calstock and then via an incline to Kelly and by a railway to Callington town.

By the time the prospectus was issued a contractor had been appointed and work had commenced. The majority of the land owners had given their consent, the incline plain, quays, engine works, stores, limekilns, houses, and premises of the Tamar Coal, Manure and General Mercantile Company had been obtained.

(This would suggest that an incline plain from Calstock Quay to Kelly already existed and was in use. although it gives no detail as to what form the incline took).

The railway was to be about seven miles long and built to the standard gauge of 4ft 8½ins with sidings to feed the mines and villages on route, the company saw their main outgoing traffic as minerals, ore, bricks, cattle and corn with the main incoming traffic being coal, timber, lime and fertilizer. The cost of transporting ore from the mines to the quays at Calstock by wagon at that time was 1s per ton per mile. The TKH&CR estimated to reduce costs by half.

It is not clear what form the motive power would take as the company planned to operate the line as an ‘Open Line’ where merchants and others will have power to convey their own goods over the line on payment of a small toll.

In June 1865 the Cornwall Railway (CR) was authorised by an Act of Parliament to build a broad gauge railway (7ft 0¼ins) from the CR near Saltash to the TKH&CR at Callington. The line was to follow a route very similar to the route the Saltash-Callington road now takes. (This proposed railway should not be confused with an Act of Parliament 30 years later authorising the GWR to build a branch line from Saltash to Callington). The line was to commence from a junction with the main CR line between Saltash Station and Coombe Viaduct heading towards Carkeel, St Mellion and Callington. The act also authorised a second railway from a junction with the CR west of Coombe Viaduct to join with the first railway at a junction in ‘The field owned by William Henry Pole Carew in the occupation of Thomas Richards’.

(This was probably to provide direct access from Cornwall to the branch without reversing and to enable trains to turn on the triangle).

In July 1866 an Act of Parliament authorised the TKH&CR to change the gauge of their railway to either wholly broad gauge or mixed gauge and to make a junction with the Saltash & Callington Railway. It also instructed that traffic on the TKH&CR should be compatible with the Saltash & Callington Railway, Cornwall Railway, South Devon Railway, Bristol & Exeter Railway and the Great Western Railway.

One bizarre clause in the Act of Parliament states.

This may have been included because of the many schemes that had been put forward for railways to serve the north coast of Devon and Cornwall and to link ports on the north coast with Plymouth to provide a more direct route for the delivery of Welsh coal. The TKH&CR itself had plans to extend to Launceston.

The three towns of Plymouth, Stonehouse and Devonport produced an almanac and the almanac for 1868 (printed in 1867) included a free map of the area to show the new forts that had been built by Palmerston, fortuitously the map also shows the route of the Saltash Railway and the TKH&CR.

Even though the TKH&CR had the backing of most local land and mine owner to the tune of £60,000 the scheme ran out of money partway through construction but the need for a railway was as great as ever. The plan was revised and a company called the, “Callington & Calstock Railway” was formed to build the railway to a narrow gauge of 3ft 6ins and to terminate the line at Kelly Bray. The Bill was introduced in 1869, and received the Royal Assent on August 9 of that year. By this Act, the Callington & Calstock Railway Company was incorporated, and authorized to construct 7 miles 7 fur. 3 ch. of 3 ft. 6 in. gauge single line between Calstock Quay and Kelly Bray. Powers to raise a capital of £60,000 in £10 shares, and a further £ 20,000 on loan were granted. Much of the money was raised outside Cornwall. Contracts were let, and work started almost at once, but before its completion, the company obtained a second Act (May 25, 1871) authorizing some minor deviations and a change of name to the East Cornwall Mineral Railway The amended line was 7 miles 4 fur. 5 ch. in length, and it was opened to public traffic on May 7, 1872. The first load to be transported was coal for the Callington Gas works.

No rails were ever laid by the CR on its line from Saltash to Callington although reputedly some earthworks were commenced.

Any further information out there? 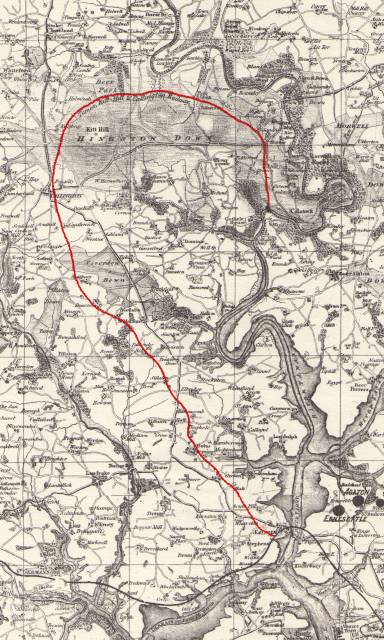