Signalling on the Royal Albert Bridge

When the Cornwall Railway was first opened to traffic, the line was single throughout except for the first mile from Cornwall Junction to Devonport and a crossing loop was provided at Saltash to allow two trains to pass. Constables were stationed at Devonport and Saltash and were responsible for working the disc and crossbar signals to protect the single line section. Permission for trains to proceed was given on the telegraph instruments.

Later a signal box containing a 20 lever frame was provided at Devonport in 1877 and a similar structure containing 18 levers opened at  Saltash in 1882. The line was doubled between St Budeaux and the eastern end of the bridge on 23 February 1902 whilst at the same time, a new signal box named "Royal Albert Bridge" was brought into use to control the single to double line junction; the frame contained 13 levers. 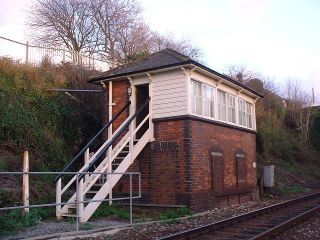 The signal box had a short life for it closed on 28 June 1908. At the time, a new box containing a 15 lever frame was opened and a new Down Avoiding line was brought into use from St Budeaux to RoyalAlbertBridge. A new 25 lever frame was installed on 22 June 1952 when Royal Albert Bridge Box took over control of St Budeaux West.

The line westward was doubled from Saltash to Wearde in 1906 and additional siding connections were installed at Saltash in 1909, along with a new 23 lever frame. In 1943 a new Down Goods Loop was brought into use between Saltash and Wearde and the box was extended with a new 31 lever frame.

Of the complete main line from London Paddington to Penzance, only half a mile has remained single throughout its existence, that being the section over the Royal Albert Bridge. The considerable savings achieved by building the Bridge for a single line (£100,000 at 1859 prices) have often led to problems for the operating department, for although the single line section is only half a mile in length, its permanent speed restriction of 15 mph and each train could take two to three minutes to clear the single line section. If the train was heavy, and had been stopped by signals at either end it could take five minutes to clear the section due to the gradients leading on to the Bridge.

For many years, the single line was worked by Electric Token Block, which is an arrangement where only one token may be removed from holding machines by the joint action of the signalmen controlling the single line. The token is them given to the enginemen as an authority to enter the single line section. The system is still in widespread use on the Network Rail.

The token working over the bridge was abolished from 10 July 1961 and replaced by a system of interlocking. In simple terms, the line appeared to be signalled a double track main line and both signal boxes contained separate Up and Down normal double line block instruments. A track circuit over the bridge was interlocked with the block instruments and an interlocking lever in each box controlled the settings. This was a very rare method of working particularly in the West Country and it was very efficient over a short busy single line section.