When researching a subject it is often the smallest piece of information, usually stumbled across by accident that can lead to new discoveries or clear up a point that has eluded you for years.

This was the case when I received an email from Chris Osment regarding an entry in the ‘Black Book of Cautions and Commendations to Enginemen c. 1923-1945’ which is held at the National Archive.

Entries in the book include the following about Driver F. Neale on the Callington branch.

Cautioned as a result of a derailment of a train no. 160 (02 class) - Bere Alston Points wrong.

He received a further caution for not wiring information to Friary about a locomotive failure. Engine E757. (Earl of MountEdgcumbe)

He was suspended for 1 day for running through points at Callington and the engine man changing over whilst engine in motion.

He was severely reprimanded due to a steam brake piston seizure in cylinder. Engine E192 (02 class)

Severely reprimanded as a result of a derailment at Callington. Engine E0515. (0395 class)

Driver Frederick Neale was appointed 'Foreman Driver' (i.e. senior driver) in December 1915 at a salary of 45s a week.

To be appointed senior driver in 1915 would indicate that he had been working on the branch for some time, probably since the opening in 1908.

Neale had retired by 1949, the four crews then being:-

Bill May his fireman was Bill Stacey

Although Neale was no longer working for the railway in 1949 he was remembered by his nick name of Natty Neale.

Apart from being a rather ‘accident prone’ senior driver, a close look at one entry in particular makes very interesting reading.

Severely reprimanded as a result of a derailment at Callington (Engine E0515).

Class 395 loco, same as the one at Callington

Although there is anecdotal evidence that tender engines (particularly the T9) were used on the branch at times of water shortage, there is not, to my knowledge, any documented evidence…..until now.

There is a photograph of class 395 loco no. 029 with a train at the branch line platform at Bere Alston circa 1930 but this does not necessarily mean that it has come off the branch, it could be picking up flower traffic for onward shipment. 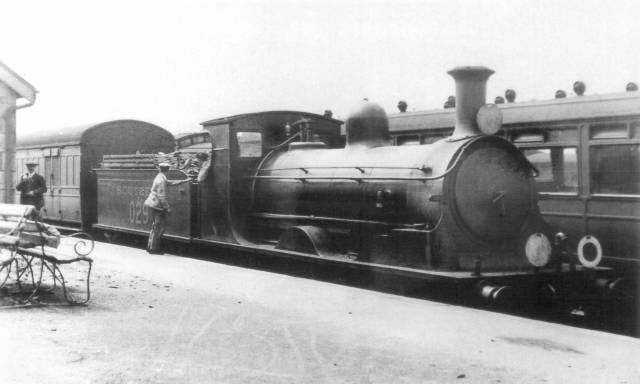 395 class no. 026 0-6-0 locomotive at Bere Alston branch line platform circa 1930. The loco is facing towards Tavistock. If this loco has come off the branch it would have had to go tender first to Callington.

The “395” class of locomotives were designed by Adams as a main line goods engine and built by Neilson & Co. Glasgow between 1881 and 1886.

In total there were 70 locos in the class.

The locomotives were very successful and a favourite with the Railways Operating Division of the War Office which resulted in many of the class being shipped overseas in WWI.

None of these locomotives ever returned to the UK but some were taken over by the war department in Egypt in WWII where their tenders were used as water carriers in the WesternDesert.