Goods wagons of the PD&SWJR

The Company's main line from Lidford to Devonport was leased to and operated by the LSWR from the date of its opening in 1890. The rolling stock required for a branch of the railway from Bere Alston to Callington, this section of the line was opened in 1908. The line had its origins in the East Cornwall Mineral Railway, a 3ft. 6in. gauge line opened in 1872 connecting the mines and quarries in the area with a quay on the River Tamar at Calstock. The PD&SWJR purchased this line in 1894, and eventually rebuilt and extended it across the River Tamar to Bere Alston as a passenger-carrying standard gauge light railway.

Holman Fred Stephens, the well-known light railway engineer, was in charge of the ECMR reconstruction and consultant on the building of the BA&CLR. With gradients as steep as 1 in 38, he very wisely ordered new and powerful locomotives, but most of the remaining stock was purchased second-hand. The passenger vehicles came from the LSWR but for his goods wagons Stephens went to R. Y. Pickering of Wishaw, near Glasgow, a firm much favoured by him at the time. They arranged to supply fifty open and two covered goods wagons, purchased second-hand from the Midland Railway at Derby. Second-hand brake vans were also considered but, mindful perhaps of the gradients, it was eventually decided that Pickering should build two new vans, which they did to their general arrangement drawing, No.4439.

The open wagons consisted of two classes, both of which, from photographs and dimensions, can be confirmed as standard 8 ton Midland Railway designs. The first group comprised 30 three plank drop sides, and the second 20 five plank open wagons. From Pickering's records we know that these open wagons were numbered from 1 to 50, and from the evidence of three photographs, and a Southern Railway internal wagons stock list, it is believed that the drop sides were Nos. 1-30 and the five planks Nos. 31-50, but this is not definite. The two covered goods wagons were numbered 51 and 52, in all probability being standard MR vehicles of the well-known offset sliding door type, but neither photographs or dimensions have been found to confirm this. They were probably similar vehicles purchased by the Isle of Wight Central Railway. 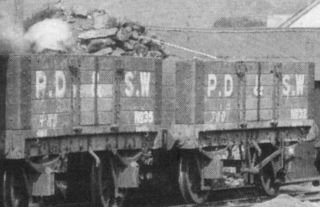 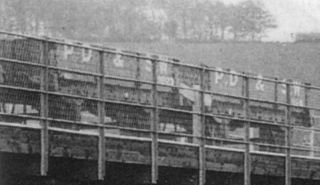 The brake vans were numbered 53 and 54, and were rather unusual on several counts. The very practical arrangement of the handbrake is noteworthy, as is the recessing of the internal partition to suit. The provision of vacuum brakes on a goods brake van was unusual at this period, especially as none of the other goods stock was so equipped. Two possible reasons for this come to mind; namely the working of vacuum-braked LSWR van trains conveying market produce as was common in later years, or the working of mixed trains with the possibility that these travelled towards Calstock with the brake van next to the passenger vehicles, so as to increase the amount of brake power under the control of the driver, rather than in the conventional position at the rear of the train. As the gradient fell in both directions towards Calstock any breakaway would be kept in check by the rest of the train. Such mixed trains travelling away from Calstock would of course have to be marshalled in the normal manner with the brake van as the last vehicle. The very low buffer height on these vans seems to have come about as a result of Stephens requiring that the wheels and axles be the same as those fitted under the MR wagons; presumably it had originally been intended to fit wheels of a larger diameter. 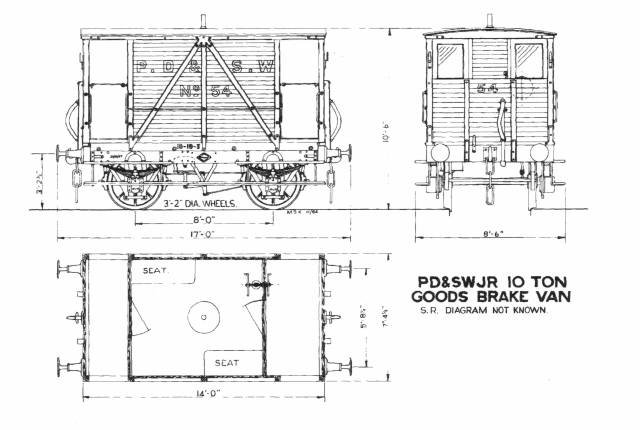 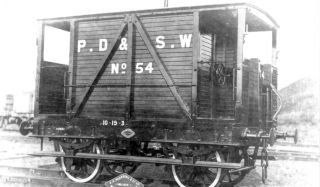 The wagon stock livery was recorded by R. Y. Pickering as 'bright red the same as William Cory's. Ironwork was black with lettering and numbers in white, shaded black on the wagons, but the brake vans received un-shaded letters despite instructions to the contrary. It is worth noting, however, that this same instruction stated that the lettering was to have been 'PD&SWJ', but in practice the 'J' was omitted.

The proportionally large number of open wagons reflected the line's origins the ECMR owned 2 engines, 126 open wagons, 16 covered wagons, 2 service and 3 brake vehicles but in fact the local mining activity was already nearing its end by the time the line was rebuilt. It had been intended that the mineral traffic should continue to be worked down to Calstock Quay by way of a wagon lift, but coastal shipping was also on the wane, and it would seem that the lift saw little use between 1908, and when it finally closed in 1934. One wonders if the PD&SWJR goods stock was confined to the line. The rolling stock of the minor railways was excluded from the common-user policies of World War 1 and it seems that most of the railways' wagons were to hand when the LSWR took over the line in 1922. We say 'most' because one of the covered goods wagons was scrapped before June 1917 and the other failed to receive an LSWR number.

Of the open wagons, seven did not have LSWR numbers allocated and the rest became Nos. 01 to 043 in one of the LSWR's internal user lists. Despite the fact that they agreed with two diagrams issued to cover the similar S&DJR wagons, none received diagram numbers. Later, the remaining survivors became Nos. 0238s to 0263s in the Southern Railway service stock fleet, mainly a Eastleigh Works, but at least one example roamed as far afield as Feltham.

The brake vans were recorded in the LSWR diagram book but do not seem to have had LSWR numbers allocated. The SR gave them numbers 56042/3, both being renumbered at Eastleigh in November 1925. It is thought they both remained on the Callington branch until scrapped, No  56043 (ex-No. 54) lasting until September 1928, and its running mate until March 1930