Holman Fred Stephens and the building of a branch to Callington

When you read books and articles about the Plymouth Devonport & South Western Junction Railway Co. (PD&SWJR) they rarely mention Stephens. Likewise books about the Colonel and his railways seem to concentrate on other lines while the PD&SWJR. is relegated to a few pictures with little hard detail. Even a trawl through ‘The Colonel’ index reveals few references to his line in the S.W.

So what was his involvement in the building of a branch line from Bere Alston to Callington.

A bit of background

The L&SWR main line from Waterloo to the SW relied on the GWR for access to Plymouth via their branch line from Lydford. The PD&SWJR built a line from Plymouth Kings Rd. Station to Lydford via Bere Ferrers, Bere Alston and Tavistock. The line was operated from the outset by the L&SWR giving them direct access to Plymouth but was always owned and maintained (until the grouping) by the PD&SWJR.

There had always been plans to link Callington to the main rail network, the two front runners were the GWR’s plan for a branch from Saltash (they ran a bus service from Albaston via Callington to Saltash station) and the L&SWR/PD&SWJR plan for a line from Bere Alston to Callington and points north. The people of Callington preferred the GWR route to Saltash but it was the Bere Alston option that went ahead.

(A)               To build a new railway, the Bere Alston & Calstock Light Railway (BA&CLR) from the main line at Bere Alston via a newly constructed viaduct to Calstock and to join the ECMR at a point above the incline and south of Gunnislake

(B)                To re-align the existing 3ft 6" East Cornwall Mineral Railway (ECMR) which ran from Kelly Bray to Calstock Quay via an incline, and to convert the goods depots at Kelly Bray, Monks Corner, Cox Park and Drakewalls to passenger stations.

(A)         The contract to build the BE&CLR was awarded to the building firm of John George Lang of Liskeard. This was the biggest job that Lang had ever undertaken and he greatly under estimated the cost, time and complexity of the job.

(B)          The upgrading of the ECMR was to be carried out by the lines owners the ‘Plymouth Devonport & South Western Junction Railway’ (PD&SWJR) under the direction of Capt. Sowton who had been the General Manager of the ECMR since 1883. It was realised that there was a lack of light railway expertise so the PD&SWJR board agreed to employ an engineer with the relevant experience to advise and work with Capt. Sowton. Holman Fred Stephens was approached and in 1904 became a consultant engineer to the PD&SWJR. In 1905 the board decided to convert the line to standard gauge (probably on advice from Stephens). He was also asked to acquire rolling stock and signalling for the whole line. 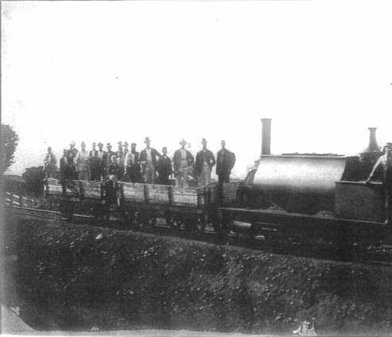 Stephens did not base himself in the west county but preferred to periodically travel to the area to inspect the work in progress and advise on work to be carried out. He would visit on average about twice a month, in the early stages there were longer gaps between his visits but when work was at a critical point and towards completion and the opening of the line his visits were more frequent.

The management saw Stephens as a dynamic entrepreneur with fresh ideas and the ability to keep costs under control.

The workforce saw Stephens as an interfering outsider who thought he new everything.

The truth is probably more towards the managements view.

His routine was to travel to Tavistock or Bere Alston then on to Callington for a meeting with Capt. Sowton and a progress report. This was usually followed by an inspection of the work in progress, he would quite often ‘walk the line’ dictating notes to an assistant. On returning to his office letters would be sent out detailing things that required correcting and prioritising future work. Quite often these letters accompanied by his instructions would be written on the train as he returned to Tonbridge.

If materials were required to progress work they were ordered within a couple of days to be delivered to the site as required, rail and sleepers were quite often shipped to Plymouth and then onto Calstock by barge (in Jan 1906 7,500 sleepers) lighter material arrived by rail at Bere Alston to be transferred to Calstock via the viaduct cableway.

When plans were required they were drawn and dispatched within days. Stephens attention to detail was meticulous with many sketches to illustrate the finer details of construction.

It is probably true to surmise that there was no great pressure on Stephens as Lang was having problems with the viaduct and the completion date was continually being revised.

The work on the ECMR consisted of :-

2.             Removal of the existing ballast and to re-sleeper the track, laying new rail to standard gauge and relaying the best of the old rail as a third rail at 3ft 6" without interruption to the line continuing in use as a narrow gauge mineral railway. (This third rail was removed on completion of the wagon lift and just before the line was inspected by Major Pringle from the B of T).

Re-ballast the track, ballast being obtained locally as spoil from Wheal Edward and Kit Hill quarry

3.             Strengthen or rebuild the bridges adding parapets, this was done by the addition of steel girders

6.             To build a carriage shed and engine shed complete with engineering and repair facilities at Callington. 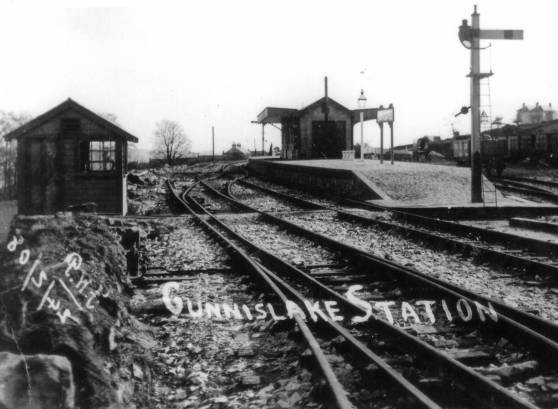 Gunnislake station May 1908 with the typical Stephens station 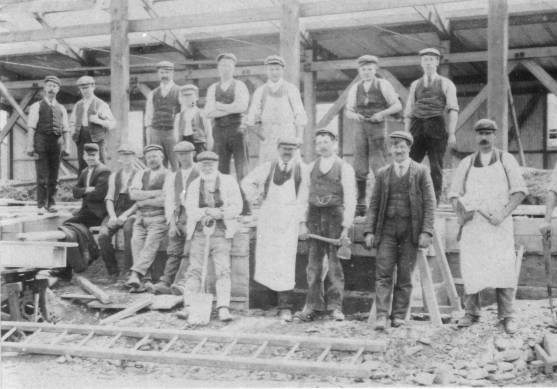 Stephens also had an involvement with the overall project. He was asked to supply the motive power, rolling stock and signalling for the whole branch.

His initial intention was to purchase second hand locomotives from the L&SWR. When no suitable loco’s were available three new ones were ordered from Hawthorn Leslie,

One Neilson, (No. 2) was converted to standard gauge and a cab added but proved to be under powered and of little practical use.

4 wheel passenger coaches were obtained from the L&SWR but were soon replaced by more modern bogie coaches.

Signalling for the branch was purchased from F.A. Atkinson & Co. of Birmingham at a cost of £1200. 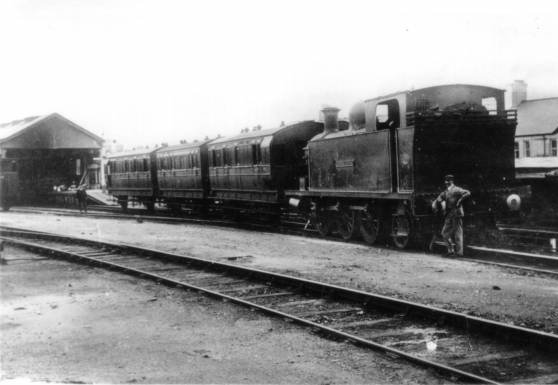 The above information is probably accepted as the limit to Stephens involvement with the building of the PD&SWJR’s branch line to Callington, but was it?

Much of the correspondence between Lang, (the builder of the BA&CLR) and Henry Byers, (the PD&SWJR engineer) still exists, as do all the weekly reports written by Byers to the board. Byers also kept a diary in note form, probably used to compile his weekly reports. Although few of these letters are addressed to H.F. Stephens or are written by him, many refer to Stephens or refer to correspondence between Stephens and Byers or Stephens and the board pointing to Stephens having a much greater input into the branch line construction than was first thought.

As early as Nov 1905 the board were concerned by the slow progress being made by Lang.

‘I enclose press copy of a letter to Lang. I have asked Stephens to look into the matter as to where earthwork can be put. Banks would be widened where there is room. I believe Stephens will be down tomorrow’.

‘….Mr Stephens reports that work re the abutments was going on in a “very slow and slack way” and also that No.9 coffer dam is not being pushed forward and the stage started three weeks ago is not yet finished….’

‘….Mr St. Aubyn asked Stephens whether if no unforeseen difficulties occurred in the foundations of pier No.9 would the line be ready for opening by 1 June 1906…..’

‘…that with due diligence there was no reason why the line should not be ready by the due date….’

‘I have just received a telegram from Mr. Stephens to the effect that it has been decided to have the Bere Alston Station buildings in masonry. The plan sent to you is therefore cancelled and I expect to get another drawing in a few days. I think Mr. Coombe has made some enquires as to where stone similar to that used in the present station buildings can be obtained’.

Does anyone know to what buildings this refers?

There was in Feb. also much correspondence where Stephens was asked to arrange for the removal of telegraph poles and the re-routing of telegraph wires around the area of Bere Alston Station.

On 22 Feb 1906 Stephens wrote direct to Lang saying he had discussed the use of the permanent way for ballast with Mr. Church and in effect directed Lang on what to do

‘… you will arrange to ballast the same (except for top ballast) and to provide a rail press to straighten any crippled rails and place same in sidings and make good any damage to chairs and sleepers. You will also agree not to allow any soft filling….’

19 March 1906 Stephens sent the plans for Calstock Station to Lang. There was also a string of correspondence about minor matters but all outside Stephens original brief.

It is clear that by the summer of 1906 that Stephens commanded considerable respect from the board and from Byers. His advice and opinion was sought after and any recommendations he made were acted on.

‘Mr Stephens reports to me that it is your intention to drive dolphins in the river for the purpose of attaching guy roped from the centres of the arch over the river. I consider that this is courting disaster. Any vessel or barge fouling a dolphin or rope would in all probability upset the whole lot of centres and if any arch was turned it would endanger the whole viaduct.

I cannot agree with this plan…….’

‘Mr. Stephens reports that you locomotive is not powerful enough and can only take up 3 trucks at a time.

‘Mr. Stephens notes on his last visit to works.

The following is an extract from Stephens notes made on his last visit, some of the points I mentioned to you this morning:-

“As solid block work is to be used for pier No. 9 there is no reason why this work should not go on night and day”

“This surely should be started now”

‘Will not be finished for at least 10 weeks. This cutting should be worked with a second lift and filling tipped into the trucks by skips running on rails supported on needles over the tops of the trucks used on the bottom lift’

‘Referring to my interview with Mr. Stephens and yourself…..I am prepared to supply and spread ballast from Wheal Edward between Calstock Station and the junction with the East Cornwall Mineral Line for the sum of 2/10 per c. yd. (this includes purchase of ballast)……’

‘2 miles of rails will leave Southampton for Plymouth about Thursday next.

Can you hurry on the chairing of the sleepers, I noticed yesterday that progress herein was not rapid.’

‘…..Stephens reports to me that there is a crack in the key of arch No. 5 – No. 6. This should not be – No centres should be slacked until the arch next has been keyed in and gravest care should be taken…..’

‘I am sorry to say that Mr. Stephens reports that you are not making the progress you ought and certainly the number of men employed as given by Mr Byers does not look light it….’

Towards the end of 1907 there are many correspondence about minor details and finishing leading up to the B of T inspection.

In the weekly reports sent by Henry Byers to the PD&SWJR board Stephens is frequently mentioned, sometimes as a source of information but more frequently as a critic of Lang’s inexperience and slack working practice, often followed by a recommendation of how to improve things.

It is quite clear from these correspondences that Stephens opinion was valued and that the board were happy to use him as a ‘trouble shooter’.