Callington as a Tourist Centre

One of the prettiest railways around Plymouth is the line of the Plymouth, Devonport and South Western Junction Company, which runs from Bere Alston station to Callington. Originally it was a narrow gauge mineral railway, constructed for the purpose of carrying minerals and stone from the various mines and quarries from Callington and district to Calstock Quay. It was bought by the Company, and worked by them for several years as a mineral line, the ultimate object being to connect it with their main line at Bere Alston, which is being worked as a part of the London and South Western Railway system. In 1908 the Plymouth and Devonport Company re-modeled the mineral line, substituting modern appliances for the old, and converting it into a standard gauge railway. They also built a costly viaduct over the river Tamar, and cut a new line from Calstock to Bere Alston station.

The rolling stock consists of 5 locomotives, 4 first-class saloons, 12 third-class coaches and "compo." brakes, and 52 goods vehicles. Opened for traffic on March 2, 1908, the line runs through some of the most beautiful scenery in the West. There are no sulphurous tunnels, and one need not be afraid to look out of the carriage windows to admire the beauties of the district, or to inhale the fresh air from the neighbouring hills.

Two 0-6-2 tank engines, the Earl of Mount Edgcumbe and Lord St. Levan, have been doing some fine work over this small line. Some of the gradients are 1 in 38 and several of the curves are of 6 chain radius. The Tamar river is crossed by means of a fine concrete viaduct, and Calstock station is on the western side. On the viaduct a wagon lift, worked by steam, has been erected for lifting loaded and empty wagons from Calstock Quay to the running roads. The capacity of this lift is 16 tons, and the height from the quay to rail level is 110 ft.

A break of journey at Calstock will enable any persons interested in railway appliances to inspect the lift. Calstock, a small town situate on the Cornish banks of the Tamar, is somewhat unique as a parish in this part

of the county. Its river scenery is unsurpassed, and unusually variegated. From the time it skirts the parish below the rural and picturesque Horse Bridge to its passage past Cotehele, we have here well wooded and gentle slopes, there beetling crags rising hundreds of feet; then a village nestling amidst rich orchards and fertile gardens; and next an island, small, but like a gem set in the silvery waters. From the tortuous river the ground rises like a series of terraces to Hingston Down, one of the numerous moors running through Cornwall. This has its natural crown and gloryin Kit Hill the highest point in the neighbour­hood, whence may be seen such widely different points of the compass as Caradon, Windmill (in Launceston) the tors of Dartmoor, and Saltash railway bridge. The main road which leads to Callington is 700 ft. high, and from it the sea to the south by day and the revolving lights of Eddystone by night are clearly dis­cernible.

After leaving Calstock, the line begins a climb of 400 ft. to Gunnislake station, winding in and out curves of 6 chain radius. If seated in a rear carriage, a passenger can often see the 0-6-2 tank engine toiling with might and main on her way up the grade of 1 in 38 round some sharp curve. 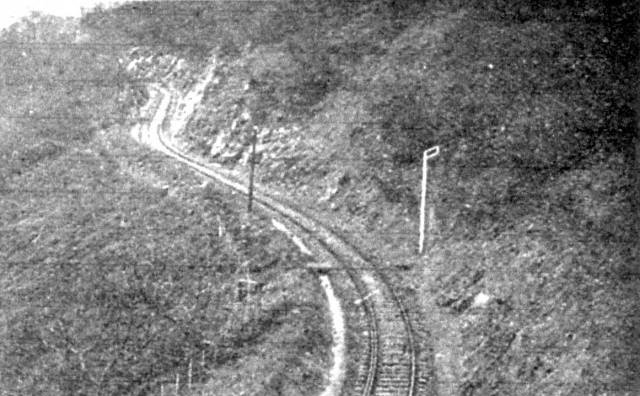 The above picture is a typical illustration of one of these curves.

Readers will note the check rail, and the fact that the line is literally cut from the side of the hill. After leaving Gunnislake, still climbing, we get fine views of Brent Tor, Latchley, and the Tamar meandering through the valley hundreds of feet below. Passing along, we come to Luckett station, where the summit of Kit Hill is within easy distance. Here we find a smart and trim lady station mistress, who, single handed, attend, to passenger, parcels and goods traffic, and is responsible for signals. Kit Hill, famous as the highest land in the district, except Caradon Hill, is at an altitude of 1,067 ft. above sea level. Situate about 1½ miles from CallingtonTown, it forms the summit of Hingston Down, whereon are seen a mine stack and buildings, as well as the remains of a large encampment, still marking the scene of a terrible battle fought centuries ago.

The remarkable pile of stones called the "Cheesewring" or "Wringcheese" — so named because they rest upon each other in cheese fashion—is situate on the common called Stowes. Comprising a large mass of granite rock 22 ft. high, these stones over- hang their base so much that the wonder. is how they remain in position. Ten in number, the stones are at the broadest place on the top about 34 ft. diameter, and at the narrowest part of the base about 17 ft. This place is an object of great interest to the tourist, and a natural curiosity. Within a mile to the northward of the Cheesewring, stands another extraordinary assemblage of rocks, termed, owing to their conical arrangement, "SharpPointTor." The elevation is 1,200 ft. above the sea and the panoramic scenery is very fine. This, with Kilmer, is the highest point in the district of East Cornwall. Tourist and Excursion tickets are issued from all the principal stations on the London and South Western Railway to any station on the Plymouth, Devonport and. South Western Junction Railway, and the line is becoming exceedingly popular for school pleasure parties, extensive accommodation being made at the various grounds on the system.