In 1917, 10 New Zealand soldiers lost their lives far from the front. In 1917, twin sisters Frederica and Clara Liddle were entertaining the local rector to tea with their mother when news of atragic accident reverberated around the tiny village of Bere Ferrers. Only a few hundred yards away at the village station the bodies of 10 New Zealand soldierslay strewn over a section of track. They had got out of their stationary train only to be hit by another train coming in the opposite direction.The accident never should have occurred, but from those few fatalseconds at 3.53 pm on September 24, 1917, a kind of bond was sealed between the 200 or so citizens of Bere Ferrers and New Zealand.Now aged 83, Clara Liddle and Frederica Clemo were recently sitting over a cup of tea recalling the incident to the New Zealand High Commissioner to Britain, Bryce Harland. He had come to Bere Ferrers for are dedication service to the soldiers at the 900-year-old St. Andrew'sChurch. As well as the twin sisters, Harland talked to the son of a guard on the troop train and Ellen Hicks, a 92-year-old woman who was so saddened by he loss of life that she would regularly travel the 20 km to Plymouth to tend the soldiers graves. Harland led the largest group of dignitaries Bere Ferrers had seen in many years for the service. The "Friends of St Andrew's" had decided the service should accompany the re-hanging of a brass plaque to the memory of the soldiers. There hanging was part of a nine-year restoration of St Andrew's, a tallairy and cruciform Norman Church.The Norman connection began when the de Ferrers settled in the area 900 years ago, and life in Bere Ferrers has been tranquil ever since -except for the event on an autumn afternoon in 1917 which violently shattered the calm. Local Historian Gerry Woodcock says it began when a train full of New Zealand troops, who had just arrived in the country, left Friary Station, Plymouth, at 3 pm. At 3.50 the train approached Bere Ferrers. The soldiers - raw, sick, tired and above all hungry - were on their way to Salisbury Plain for preliminary training. They had breakfasted at 6 am and were told that rations would be distributed on the journey. The arrangement was that, when the train made its first stop, at Exeter, two men from each carriage would collect provisions from the brake-van together with cups of tea and buns provided by the Mayoress' Comforts Fund. As the train pulled into Bere Ferrers, the driver braked in response to a signal, and made an unscheduled stop. It was 3.52 pm. The train was a long one, and the last carriages had not reached the platform. Some of the men in this rear section decided they must be in Exeter and eager to break their 10-hour fast, they jumped down, ignoring the "two from each carriage" instructions. Some of them spilled out of the carriage doors on to the down-line track. The Waterloo-to-Plymouth express had left Exeter on time that afternoon at 2.12 pm. It made its last stop at Tavistock. At 3.52 pm, as the troop train came to a halt, the express made its approach to Bere Ferrers station.

The driver sounded the whistle in the normal way, and, seeing the stationary train on the other track, prolonged the blast. The track takes a sharp corner on its entry into Bere Ferrers and the driver and fireman had little time to react as they passed through at 40 mph. At 3.53 the engine of the express passed the rear of the troop train, a split second before the fireman, Charles Thorn, shouted "Whoa! Soldiers on the track. "The driver, John Skinner, immediately applied the brakes and the train pulled up about 400m beyond the station. There were blood marks on the side of the engine and the first coach. One of the survivors later described the moment of impact: "We never thought of express travelling at 40 miles per hour. They don't travel at that rate in New Zealand." It was a wonder more of us were not killed. I saw the coat-tails of the man in front of me fly up, and I picked his body up afterwards some yards down the line. "Nine men were killed instantly and a 10th died in Tavistock Hospital the following morning. They were aged between 20 and ??? Years. Several others were injured. An inquest revealed that the men hit got out of the train on the wrong side simply because they assumed the door of entry was the correct door of exit. A verdict of accidental death was recorded. Bere Ferrers, which along with the nearby town of Bere Alston, lost 41men in the First World War, went into mourning. 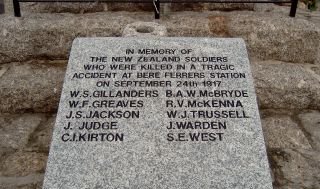 A tablet was put up in the church recording the names of the victims and memorial services were held .William Voaden, whose father was guard on the troop train, remembers the day. Now aged 81, he can recall his father coming home: "he wasn't his usual self and mother asked him why he was crying. He told us what had happened."At the service, the local rector, the Rev. Allan Wakefield, told a full congregation sitting on finely carved Elizabethan pews: "Those senior citizens who can remember the tragedy know the sadness which overshadowed the whole of this parish ."William Greaves, John Jackson, Joseph Judge,??? Warden, Sidney West, Chudleigh Kirton, Baron McBryde, Richard McKenna and William Trussell -Harland said: "The men who died in this frightful accident 72 years ago died because they were showing their loyalty to what they thought of as the mother country "I think that must have touched the people of Bere Ferrers at the time It touches me that the people of Bere Ferrers remember them 72 years later. "I think their loyalty to their mother country is matched by this community loyalty to them." 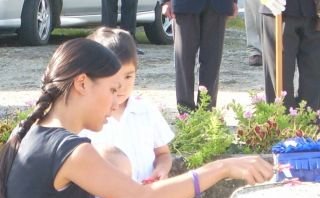 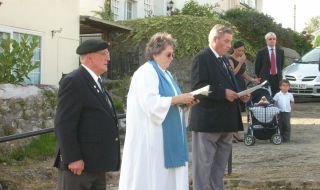 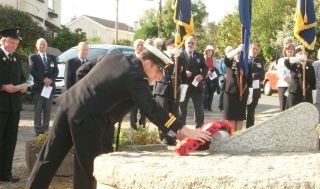 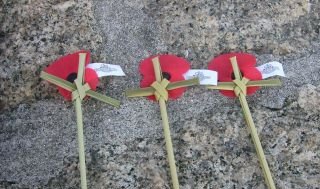 Left. Lt. Ben Till, millitary advisor to the New Zealand High Commision places a wreath on the memorial

"Who shall sing the song of them,

The wonder and the strength of them,

The gaiety and tenderness they bore across the sea?

In every heart's the song of them,

The debt that England owes to them,

The chivalry and fearlessness

That strove and won her free."