Plans were drawn up in 1875 by Galbraith and Church, engineers of the LSWR, who would later be responsible for the PD&SWJR lines from Lydford to Devonport (LSWR) and from Bere Alston to Callington.

The Stonehouse Pool Improvement Act received the Royal Assent on July 13th 1876. Work started in January 1878 and the line was ready for use by the end of that year

The branch commenced at the five-arch road bridge just to the east of Devonport Station, ran into a cutting and then a tunnel beneath the goods shed.  Provision had already been made for this when the Station was erected.  Emerging from the tunnel, the line then crossed the road leading to the old rectory house and ran beside the road on a rubble embankment.  The line gradually fell to the point where it ran underneath the main Stonehouse to Devonport road on the Devonport side of Stonehouse Bridge. It terminated a few yards beyond that point, in a 20-feet deep cutting beneath the Bluff Battery. The contractor was Mr Brady, of Barnstaple, North Devon. The tunnel under Stonehouse Hill was constructed without interruption to traffic using that road, including the trams.

It was then up to the Stonehouse Pool Improvement Company to arrange the construction of the lines on the foreshore for the benefit of unloading vessels at the quayside.

The London and South Western Railway was quick to realise that this Branch could be adapted for ocean liner passenger traffic, in competition with the Great Western Docks at Millbay.   This they did and commenced renting the line on the quayside from the Improvement Company on Friday December 25th 1885.  The Board of Trade's Inspector approved the use of the line for passenger traffic around the same time. 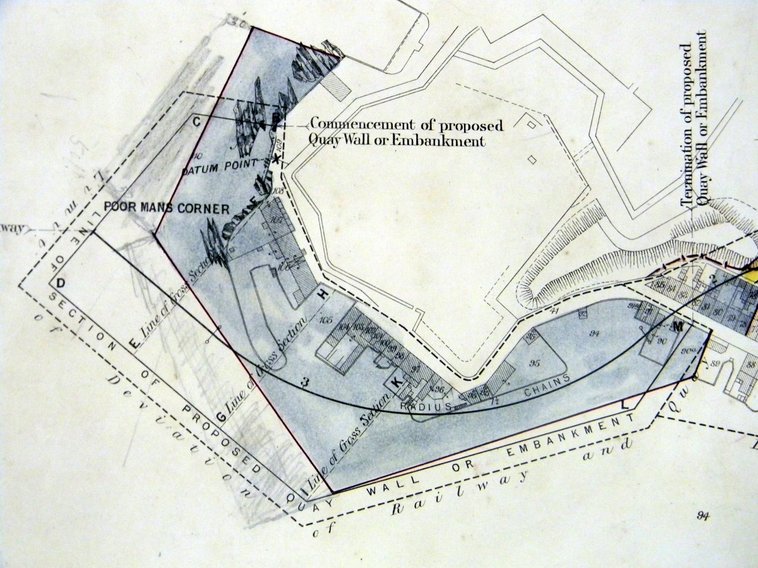 The original plan of 1875 proves to be very interesting as it is overdrawn on an older map. It shows the original coast line below the fortifications included a long lost breakwater protecting a small harbour with rocks to the North West. It would be interesting to know the origins of the name ‘Poor Mans Corner’. It is not clear why an area is shaded blue as the proposed quay wall or embankment is outside this area. It would appear that plans were flexible as the pencil shaded area seems to show an alternative option.

It was announced on Monday February 15th 1886 that: 'The Devonport New Quays and London & South Western Railway Station, Stonehouse Pool' were now open for traffic.  The Quays had a depth of water at ordinary low spring tides of 18 feet, although this went to 60 feet a few feet out.  There was, of course, a long list of landing rates, ranging from 6d for a hundred deals, or for bulls, cows and horses, down to ½d for a hogshead of beer or cider, or for a quarter of wheat, malt or barley.  Foreign vessels lying at the Quays had to pay 4d per registered ton.

The line opened for goods traffic on March 1st 1886.  Given the announcement referred to above, placing the opening in mid-February, this may have been the date upon which the first traffic was recorded.  It also suggests that although the line was ready in 1878 it may not have carried any traffic until the completion of the New Quays in 1886.

During 1903 and 1904 the London & South Western Railway erected a passenger station to cater for transatlantic liner traffic.  It took the form of a platform, 350 feet in length, with one side used entirely for mail and baggage.  All the usual offices were provided, including two waiting rooms and a refreshment room. The Ocean Quay Station was not opened until Saturday April 9th 1904, when the first Ocean Special departed at 5.03am.

Early on the morning of Sunday July 1st 1906, one of its 'ocean specials' was speeding so fast through Salisbury Station that it reeled on the curve in the Station and collided with a train of empty milk trucks.   Of the 43 passengers on board 24 were killed.

As from July 1st 1907 the LSWR took over the property of the Stonehouse Pool Improvement Company and immediately extended the island platform so that it could take two trains at the same time. In 1908 they introduced luxurious sleeping cars on the service as part of a drive for quality and comfort rather than speed.  But they were not popular and in 1910 they were sold to the Great Western Railway.

The LSWR ceased to use the Stonehouse Pool for passenger traffic from May 28th 1910. 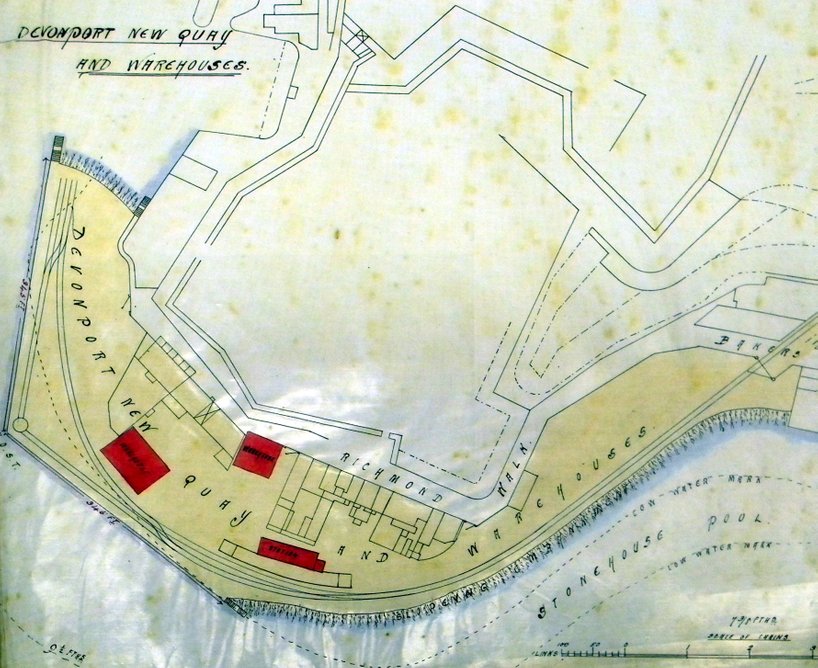 Map c1889 showing the completed works at Stonehouse Pool. Comparing this map with the on above it would seem that the final design was yet again another compromise.