The West of England Soap and Stearic Acid Candle Works 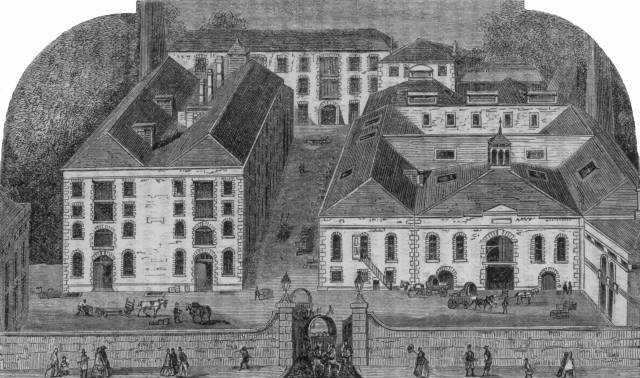 George Measom describes a visit to the works in about 1860

It is hardly likely that all who travel into this delightful and charming neighbourhood on the eastern side of SuttonHarbour will have time or opportunity to do as we did, although they would be well repaid for their labours. We were first conducted through the Soap Factory, and, as might have been expected were shown the cellars in which were stored the various oils and fats used in the manufacture, and we must confess to a little surprise at learning that they were brought from all parts of the world, even the antipodes; we move on to find ourselves in the ‘Slacking House,’ where the Soda Lye is prepared, to be used subsequently for saponification in the coppers.

Our guide here explained to us the great improvements that had taken place of late in the method of preparing the lyes introduced into this country by the late Mr. James Muspratt, the father of the extensive manufacturing chemists of Liverpool. The improvement he stated consisted in the substitution of a strong soda ash obtained by the decomposition of common salt for the kelp and barilla which had hitherto been the only practical source of obtaining it; and so marled was the advantage of this new process, the manufacturer was compelled to deliver it red-hot in iron carts to satisfy the demand of the soap-makers.

This Soda Ash is dissolved in large iron pans, and lime in added to absorb the carbonic acid. The clear caustic solution is allowed to run into vats sunk into the ground, whence it is conveyed by force-pumps to different parts of the buildings.

Passing from this through the engine-house, we enter by a flight of steps the ‘Boiler Room,’ with its large caldrons, or ‘coppers,’ in which the soap is being boiled.

We were extremely interested in the explanation here given us.

One vessel had just been ‘charged’ with the tallow, another was in the first stage of saponification, a third we were told was being freed from its impurities by the process of ‘fitting,’ a fourth was ‘cleansing,’ that being the technical term for the operation of emptying the liquid soap in the forms; others we noticed were in a state of quiescence, awaiting their turn.

In the next room men were employed ‘slabbing’ the large blocks which had been moulded two days previously. These slabs were quickly run out on trucks to the ‘Cutting Room,’ to be divided into the bars we are familiar with.

We retraced our steps and entered the Re-melting Room where we were met with delicious perfumes arising from the various kinds of the more expensive soaps which were being prepared for toilet requisites. Women and children were employed dividing the bars of soap into smaller pieces which were quickly taken to the ‘hot closet,’ to be handed over to the pressers. The ‘Soap Press’ is a very pretty and ingenious machine operated by a boy and turns out 60 tablets of soap per minute. After cooling and finishing it is packed into boxes by women.

The candle works is an extensive building with extensive excavations for suitable vaults for storing candles and cellars for filtration and preparation of the oils resulting from the manufacture of stearic acid and other materials. The vaults extend under the yard in front of the building. The ground floor contains all the offices, oil and tallow store rooms, melting and boiling houses and the boilers and engine house. The latter is extremely interesting to those curious in machinery: here we notice the hydrostatic pumps for working hot and cold presses, and we were informed that as many as five ‘cold presses’ were worked by one of the pumps by an ingenious contrivance of stop valves.

We ascended to the first floor, here is a laboratory and a darkened room for testing the several daily makes of candles, also a room for preparation of wick, a delicate and important operation.

The material ready for the manufacture of candles is received into a store, thence conveyed to the Refining Room, prepared for the moulders who occupy extensive and airy rooms, which are so arranged as to have the advantage of ‘every wind that blows.’

We saw candles from the minute lanterns weighing as many as 24 to the pound, to those suited for a Cathedral or Palace weighing 4 pounds each, and also many other varieties required by the community.

Females are employed where suitable work exists for them and in the night-light department ample employment is found for children of the ragged schools in cutting and punching the tins required for holding the wick.

We now approached a newly-fitted room in which the beautiful Koh-i-noor Candles are made. The candles are made with extreme care and are turned out with a style and finish that is superior to that of any we have seen.

A visit to the ‘The West of England Soap and Stearic Acid Candle Works’ should be priority for anyone who visits Plymouth.

To see combined the theoretical talent and research of the analytical and deep-thinking chemist carried into practical operation by skilled workmen and the economy of labour obtained by the employment of such hand as would otherwise have doubtless been idle, aided by the ingenious contrivances of machinery should not be missed.

The factory produces candles suited for all classes, prince or peasant, and known by distinctive appellations which seem to indicate their ultimate destination.

Koh-i-noor, Opaline, Ceylon Wax, and Composites are amongst the choicest goods. Then we observe Stearine for hot climates, of which material peculiar little lamp-candles are made in great numbers for use in Her Majesty’s Navy and Emigration and Passage ships.

In short nothing was wanting.

Condensed from what I believe to be the first railway travel guide to cover the West Country published in 1860.