This is a true story of determination to protect ships against the dangers of the Eddystone reef over a period of 300 years.

The Eddystone reef is sited some 14 miles south of Plymouth and throughout history the reef has been responsible for the loss of many ships. In the mid 1600’s it got to the point where the losses reached an unacceptable level and it was decided to erect a lighthouse on the reef to provide a warning to ships. This would be the first of 4 separate attempts (plus a re-build). 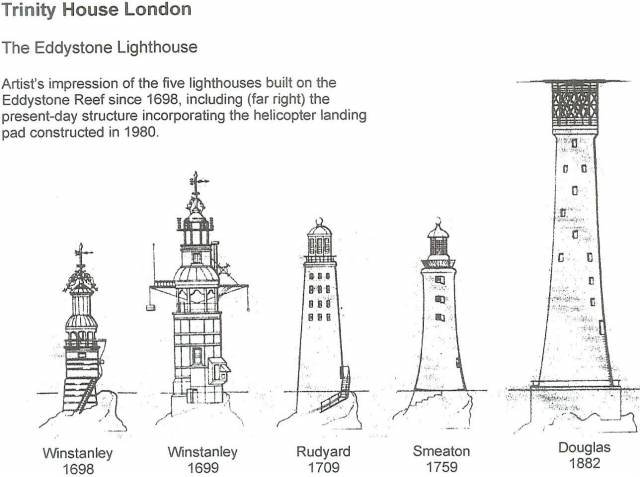 The building of the first lighthouse was started by Henry Winstanley in 1697 and by the end of 1698 it was completed and lit by candles. The structure was of wood, approximately 80 feet in height and rather ornate. Prevailing weather resulted in severe damage to the structure and Winstanley set about a re-build which was completed in 1699 with the tower now 120 feet in height and ornate as ever.

The tower survived until 1703 when a terrific storm completely destroyed the lighthouse and Winstanley, with his workforce, were lost with it.

The danger of the reef was still apparent with more ships than ever being lost and 1706 John Rudyerd was given a contract to build a tower on the reef. His design was a smooth conical shape to reduce the resistance of the sea and at a height of approximately 100 feet.

The structure was mainly of wood but set on a granite base with the door entry in the base.

The lighthouse was completed and entered service in 1709 and survived until 1755 when it was destroyed by fire. At the time the lighthouse was manned by two keepers, one of which was 94 years of age. During routine maintenance of the candles forming the light, a fire started in the lantern room and spread to the wood of the tower. The two keepers attempted to extinguish the fire using buckets of water and climbing the tower to throw water on the fire. The older man was taking a rest at the base of the tower – looked up and a piece of molten lead from the roof went straight down his throat. It is said that he continued to fight the fire until they were rescued by boat.

The 94 year old, Henry Hall, survived for 12 days and a piece of lead weighing over 7 ounces was found in his stomach.

In 1756 a project was started to yet again replace the lighthouse on the reef. This time the complete tower would be of granite blocks dovetailed into the rock and each block joined horizontally using dovetails. The vertical joining of each course of blocks was by mortar and marble dowels. John Smeaton developed quick drying cement for the job and this is still current today.

Unfortunately in the 1870’s cracks appeared in the bedrock and the top section of the lighthouse was dismantled and erected on Plymouth Hoe as a monument.

In 1822 James Douglass completed yet another tower on the reef site. This lighthouse survives to the present day and stands at 49 metres (163 feet) by far the largest of the five structures. Douglass’s improvements included the use of dovetailed blocks not only horizontally on courses but also vertically between courses making for a strong, lasting structure. 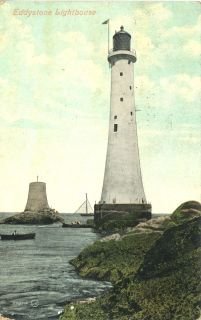 The Douglass lighthouse had various equipment changes throughout its life until in 1980 a helipad was fitted on the roof of the tower. This was the forerunner to a major refit resulting in the automation of the working of the lighthouse.

The helipad was to be used to provide easier access as against the use of a boat landing.

Due to the cramped conditions it was not possible to have the complement of keepers and an engineering workforce necessary to carry out the work. The keepers were therefore taken ashore while the work progressed. Work was completed and after a satisfactory test period the lighthouse was run in automatic mode in 1982 exactly 100 years after its initial build. When one considers the difficult access, 11 floors joined by a spiral stairway and equipment with weight up to 500 kgs it was a difficult task and completed in 10 months. The navigation aids, diesel generators, batteries and charging systems were not only monitored but could also be remotely controlled from a control centre using radio/landline links.

To cover the eventuality of equipment failure each essential system had a minimum of a duplication i.e. 2 generators, spilt batteries, lamp changers etc. Each duplication of equipment was engineered to be automatic and did not rely on the remote control to carry out the changes.

An example being that in the case of a lamp failure the lamp changer changes the second lamp and a message is sent back to the Base station that there is a lamp failure but the main light is working correctly on the second lamp. This was considered essential to achieve the very high availability required.

Trinity House has been involved for many years in the use of solar power, beginning with Acetylene powered buoys where this dangerous gas was replaced by solar panels and batteries on over 300 units. The solarisation programme also covered light vessels and island based lighthouses and then finally rock towers of which Eddystone is typical.

The advance in solar power has been possible by the improved efficiency of lamps, batteries and communication links. In the case of the link with the control centre at Harwich a mobile phone connection is used with a very high level of reliability at very low power levels.

Analysis of Meteorological data was used to determine the “sun-hour” availability over the year. Even though the United Kingdom does not have a reputation for good, sunny days it was not only possible but was cost effective to use solar power. In the case of Eddystone, 3 power systems are used: -

Solar panels are hung below the helipad over 3600, a total of 90 panels each with a maximum rating of 50 Watts. These panels are divided to charge a bank of lead acid batteries for each of the three power systems at 24 Volts D.C.

It has taken some 300 years to provide the final result which has advanced from candle powered lights in wooden structures, explosive fog signals through to a sturdy stone tower with diesel generator powered navigation aids and domestic services for keepers and entailing complex maintenance routines and refuelling.

The last change to solar power has provided a system of low maintenance i.e. cleaning panels, changing defective lamps and general inspections of the structure. These are carried out by an appointed Attendant who can be taken out by helicopter when required.

The services provided by the solar conversion cover: -