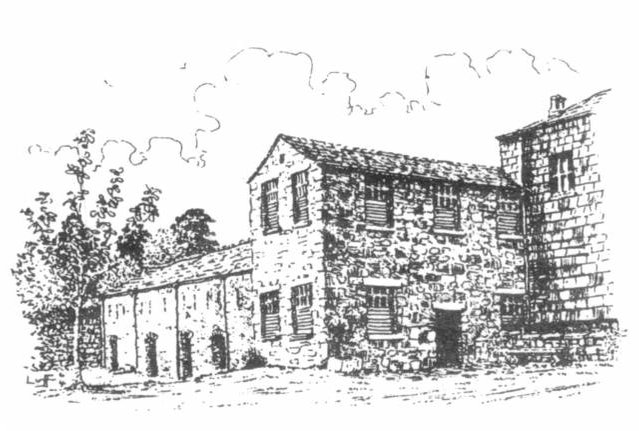 These buildings were constructed between 1851 and 1853, so it is not their age that makes them of particular interest, but the fact that their design, layout, and construction is very special and in some ways unique. Francis, the 7th Duke of Bedford (1788-1861) was a devoted and enthusiastic agricultural improver and had for a number of years invested heavily in the modernization of the farms on his Devon estate. Kilworthy, one of the largest holdings was also to be the most expensive project in this program. The Duke was also known as ‘a most careful housekeeper’ and took a keen personal interest in these alterations, often touring to see the progress on his visits to Devonshire. In the autumn of 1850, John Benson, the Duke's agent in Tavistock, together with the estates architect and surveyor, Theophilus Jones, toured other improved farms in Somerset, Dorset and Wiltshire. Kilworthy's buildings were probably designed shortly after this tour and construction began in the spring of 1851.

The walls are built largely of local Hurdwick stone - a greenish metamorphosed tuff found in the Tavistock area with granite used for lintels, sills, and in the under croft structure and cow house floors. Bricks have been used for levelling up the lintels in the under croft and also for the ventilation chimneys throughout.

The timber used for the king post trusses, joists, floorboards, purling, close boarding, and all joinery work was pine imported from the Baltic or Canada, probably via Morwellham Quay on the River Tamar. The slates for the extensive roofs were supplied by Mill Hill Slate Co. in 1851 from quarries on the Duke's land almost two miles west of Tavistock. Clay tiles were used on the roof ridges. Glass roof lights were used in the cowsheds, granary and some of the stable block. 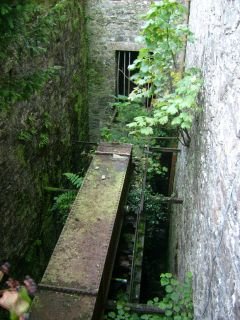 A leat taking water from the River Wallabrook was dug and a wheel pit and exit culvert excavated. The large water wheel (9.09m or 30feet diameter by 1.08m or 3feet 6inches wide) was purchased from a millwright and engineer Oliver Maggs in Dorset and installed by him, it was built entirely of cast and wrought iron and a system of shafts and bevel gears transferred power onto the horizontal lay shaft visible in the upper storey of the granary /machinery barn.

Converted from the former thrashing barn where it is likely a belt drive was taken through to a threshing machine via openings in the dividing wall between the farmhouse and the granary/machinery barn at both levels. These blocked openings can be clearly seen. There was also a steam boiler and apparatus installed probably for producing bone manure.

This building originally housed various barn machines driven from the water wheel, opening into each cow house is a set of double doors which were designed as sliding doors originally. The ground floor of this building is of suspended granite slabs over a cellar beneath. The windows in this building consist of fixed lights above louvers which can be adjusted for ventilation by means of a vertical octagonal timber with 6 projecting timber rods, one to each louver board.

Records show that a winnowing machine (apparently delivered by Pickford’s!) was purchased from a Joshua Cooch for £13 5s 0d and a linseed mill for £12 0s 0d. from George Parsons even before building work began. Between February 1852 and February 1853 numerous account book entries refer to "carriage and freight of machinery to Kilworthy." These machines probably included chaff cutter, root slicer, cake breaker, bruiser, kibbler etc.

On the first floor you can see two low doorways in the west wall which give high level access to the north and south cow houses, probably for passing feed or straw. The floorboards had steel tongues inserted between them which gave a solid clean floor surface. Some boards are of exceptional length being of Baltic or Canadian Pine. Three large trap doors are situated in the centre of the floor whilst five on the west side serve spouts that project from the ceiling of the ground floor and indicate probable positions of feed-processing  machines. The roof has nine bays with eight king post trusses with pairs of glass roof lights in the three central bays. The horizontal layshaft is over 18m. long and is hung from the east end of each of the truss tie beams and carries seven pulleys of varying sizes. 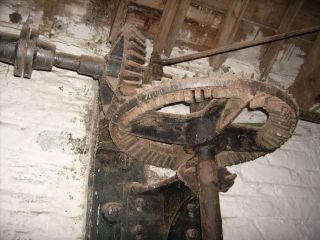 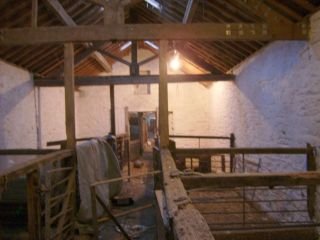 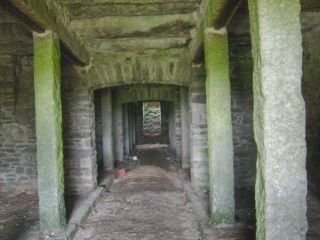 Three parallel ranges run west to east showing symmetrical design, the central cow house being narrower than the outer two. Around the outside north and west walls of the cow houses you can see openings to chutes, protected by iron grill covers, for taking dung into the under croft below. Through each of the outer cow houses run parallel sets of carved granite troughs on either side of a central walkway The central trough in each triple was for water and has an iron feeder pipe which is believed to have been gravity fed. Inside each cow house there are dung chutes again leading to the under croft. Some retain cast iron frames which originally had hinged wrought iron plates which closed the chute when vertical. The roof again is similar to the granary and machinery barn with king post trusses, close boarding and pairs of glass roof lights. The windows in the outer cow houses consist of vertical ventilation/light slits regularly spaced along the north and south outer walls. Above the central door of each cow house there is a louvered opening operated by turning a vertical rod similar to the louvers in the granary/machinery barn. The central cow house is divided by a cross-wall which originally had double sliding doors on its east side. The three bays at the east end are divided into pens made up of the original iron

rails and gates on either side of the central walkway. These pens are understood to have been for veal production. Oval openings in the floor of pens and walkway allowed dung to be pushed through to the under croft when their perforated iron covers were removed. Ventilation had to be particularly well planned in the central cow house as apart from the louvers in the west wall it had no outside walls /windows. This was achieved by building a set of ridge ventilators. Flue vents were also built above the doors at the east end of each cow house and also in the cross wall of the central cow house. The central cow house was also whitewashed.

In order to drain the rainwater from the north valley gutter, it was carried across the central cow house from north to south by means of three launders. These are open top timber troughs lined with sheet metal and can be seen in the central cow house. The water then fed into cast iron downpipes taking it to the drains below the under croft floor.

This extends the full width and length of the cow houses above. The cow house floors are carried on a post and lintel construction all formed in granite with massive slabs of varying width being carried on lintels supported on granite columns. Each lintel has a wrought iron strap along its underside turned up at either end of the lintel. It is understood that the strap gives a second line of defence should the lintel crack. In each of the 5 bays of the under croft between the two rows of granite columns, there is a central aisle, bordered by granite curb stones. On either side the dung collected on the raised areas, ready for carting onto the fields.

At the east end of the under croft an opening leads down a flight of granite steps to the water wheel chamber, but this is not accessible to the public for safety reasons.