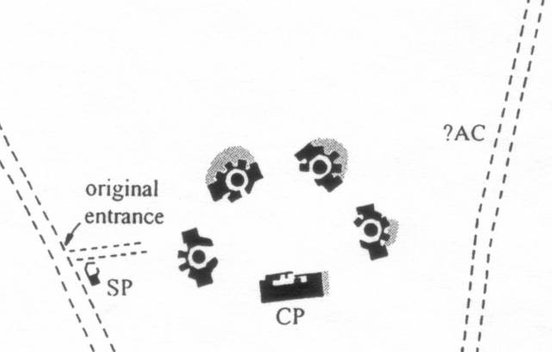 The battery is located on the Bere peninsula between the Tamar and Tavy rivers about ¼ mile south of Bere Alston. The battery faces north and defended against aircraft using the landmarks of the rivers Tavy and Tamar to approach Plymouth from the north. It was probably built in 1941 and was apparently abandoned and then reoccupied in 1944; it presumably became redundant shortly after the end of the war in 1945-6. It was probably armed with four 3.7 or 4.5-inch HAA (Heavy Antiaircraft) guns. An aerial photograph of 1946 shows four gun emplacements in an arc facing N, with a command post to the rear and a group of accommodation buildings in an adjoining field some 180 yards to the north. A magazine is not visible, nor is a gun laying radar platform; this was most likely located in the field between the guns and the accommodation. The magazine may have been a Nissan magazine, perhaps represented by one or both of the demolished buildings sited alongside the road to the east.

The battery consists of four gun emplacements in an arc facing west, northwest, northeast, and east, with a semi-sunken command post on the S side; no remains of a magazine is visible. The site is bisected by an earlier field bank and ditch, which have been partly removed to accommodate two of the emplacements. The remains survive and the gun mountings, ammunition lockers and side shelters can still be made out, they are of a type associated with 3.7 or 4.5-inch HAA guns, and the gun mountings are very similar to those at Down Thomas.

The command post is also complete and faces north. Access was from the west where a sentry stood guard, other buildings sited to the east have been demolished, together with the accommodation buildings to the north. 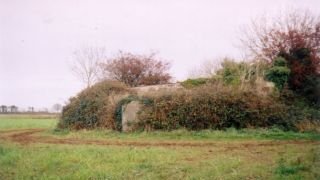 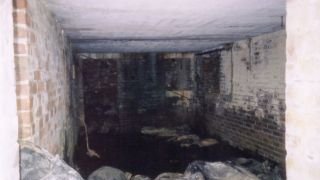 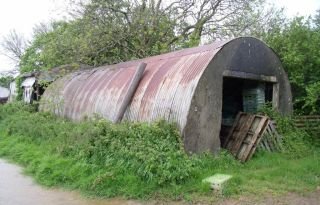 I was very young through the war years but can remember seeing the red glow which lit up the area as Plymouth burned in the blitz.

I grew up at Higher Birch Farm and remember leaving our Anderson Shelter to see one of our fighters shoot down a German bomber which came down across the Tamar. I got a hiding from my father later for leaving the shelter.

The whole area would shake with the ack-ack batteries at Battens Farm served by searchlight units at Lower Birch farm, Bickham Farm and others. In the morning I would walk the fields to find bits of shrapnel, still quite hot to touch.

The Bere peninsula was a good navigation aid to the Germans, if the weather was right. They would circle over us to find the confluence of the Tavy and Tamar rivers and know that the dockyard was 2 miles south where they would drop their bombs before heading home over the channel.

We had our ‘Dad’s army’ of course, with many amusing stories. The Bere Ferrers and Bere Alston platoons were often pitched against each other in exercises to the extent that (as one Bere Ferrers man said) by the end of the war they looked upon the Bere Alston home guard as more of an enemy than the Germans.

In common with the whole of the south west we had our influx of American GI’s, White men in Bere Alston and black in Gunnislake. I remember a convoy of black GI’s stopping in Broad Park Rd. and we school children being allowed out to greet them – my first sight of a black man. One GI stood behind each lorry with a large metal tin full of sweets, an unknown luxury!! I remember cutting my wrist on the tin opening but I didn’t mind.

The Parish Hall was taken over as a drill hall come canteen, it was surrounded by Nissan huts and I can still see the GI’s sitting on the grass cleaning their weapons. Ammunition was stored in one of the empty cottages in Cornwall St.

Christmas 1943 they gave a party to all us kids, we each had a Christmas stocking of sweets – the first and last for several years. When going to and from school we were delighted to have a US lorry pass us because always a shower of sweets and chewing gum would be thrown to us.

As a little boy I used to collect spent rifle cases to play with, one day I was standing on Furse Hill railway bridge, watching an exercise in the Lockeridge area when a GI saw me pick up a case, he promptly discharged a whole magazine into the air for me to pick up the cases.

On another exercise, GI’s came towards the village from Cornwall and rested for a while in Higher Birch farmyard. I remember seeing the light AA guns set up in the middle while others snatched some rest. When they left I had a happy time collecting all the goodies they had left behind. My father was not quite so happy! they had cleared every ripe tomato in the greenhouses.

Suddenly overnight they were gone – D day. By this time they were quite well known to the villagers and many friendships formed. They all went in on “Bloody” Omaha – the beach that nearly failed with appalling casualties. As news filtered back on the various known faces who had been killed, it was a sad village for some time.

(In fact research has revealed that battery was originally manned by the British but was abandoned by them before the Americans moved in.

The troop at Bere Alston were the Signals Section of the 29th Division (Infantry) The ‘29ers’ were based in many parts of the SW with two large camps at St. Anns Chapel between Gunnislake and Callington. The camps were on either side of the road. Whites on one side, coloured on the other)

I remember going to school in 1941 (at the time of the blitz) and meeting my father coming home from his work in the drawing office in the dockyard. He said, “Don’t worry – I’ve come home because my office has been burnt down. I also remember taking shelter in the corridors of the granite built school (1665) during a day-time raid – the staff must have thought the walls would have withstood any blast. The playground had trenches dug in the area of the school garden but there was no proper school shelter. The flag incident when the US troops arrived was not really about the raising of the ‘Stars & Stripes’ but the fact that the pole was the Parish official flag pole where the Union Flag  was flown on special occasions. My Aunt said, “Who do they think they are? Invaders?”

The Nissan hut on the road to Bere Ferrers is the last remaining hut in situ at the camp used by British troops and later the US Army. Others are in the Parish used by farmers.

The stone remains are of the ack-ack emplacements at the camp. There were also searchlight batteries.

This group helped to bring down a German bomber during the year of 1941 (Aug) – some say the unit actually shot it down on their own. 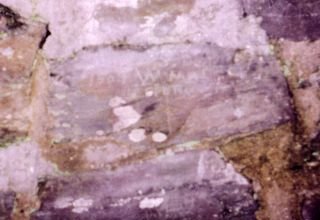 The plane shot down was a Junkers J88 A1 based in France. The date was the 17th August, the plane came down near Gawton Wood and all the crew were killed. The crew were buried at EffordCemetery but are now buried at Cannock Chase.

Some of the shells fired landed on the railway between Bere Alston and Tavistock closing the line for three days.

Bere Alston did have some bombs dropped but no casualties other than cows in a field adjacent to the station and on other farms including my father’s farm.

Late investigation via the local newspaper in Jefferson City, tracked down the family of James D (Amos).

Amos died in the early 1990’s, he was a regular soldier and went on to fight in Vietnam.

During 1941 when the raids were at their worst the population of the two villages more than doubled over night. The school, churches and chapels were opened up to let people sleep. Over 1000 people were given shelter in these buildings and private homes.

Jean Sharman remembers her father bringing home three people he had talked to on the train coming home to Bere Alston. They stayed for three months – going home by day and coming back the next evening. Special kitchens were set up to feed the evacuees.